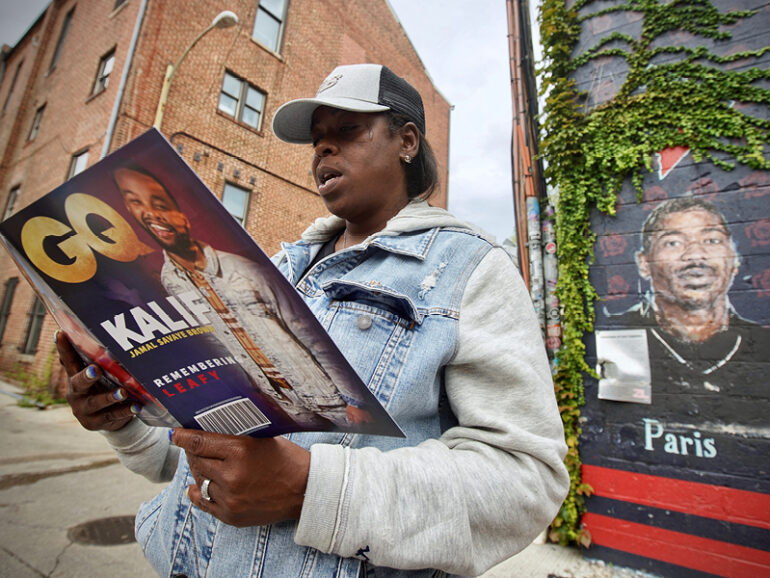 Washington, US – One by one, Seditra Brown, a concierge who lives in one of Washington’s poorest neighbourhoods, lost her three sons to gun violence: Paris in 2018, Montray in 2019, and Kalif last month.

“There is never really a way to protect your children,” says Brown, 49, who is African-American. “When they’re outside of your presence, who knows, it can happen to anybody.”

Gun violence is on the rise in the United States, official statistics show, and African-Americans living in underserved, high-crime communities are affected the most.

The trend comes as Americans have rushed to buy more guns in the past year, in response to the COVID-19 pandemic, anti-racism protests and turmoil linked to last year’s presidential election.

‘It just can’t be true’
First it was Brown’s youngest child, Paris, a 19-year-old high school student, who was killed on a sidewalk.

Then it was her eldest son, Montray, a 28-year-old father, who was shot at an apartment. Last month it was Kalif, her only remaining son, who was killed as he drove through the streets of Washington.

When Brown got the call about Kalif’s death, she could not believe it.

“I was just – it just can’t be true. It just can’t be,” Brown told AFP in a calm, almost mechanical voice, her grief hidden deep inside her.

Brown is left with three daughters and 14 grandchildren, eight of whom are now fatherless.

“I have just got to be strong for my girls, so they won’t break down, my grandkids… they go off of my energy,” Brown said.

“The minute I break down, the whole family is going to break down.”

As she grieves, Brown tries to find solace in her faith. “I just looked to God for my help and my peace,” Brown said. “I believe that God is not going to take me through all this and not have nothing good at the end.”

‘More black victims than white’
Instances of gun violence have increased both in the US capital and across the country.

Washington has recorded 144 homicides since January 1, compared to 127 over the same period in 2020, an increase of 13 percent that is identical to the increase on the national level, according to official data.

Owning a gun is a constitutional right in the United States, where a third of the population possesses at least one. And Americans have bought more weapons since 2020, in the wake of social justice protests, political turmoil and the pandemic.

African Americans are much more likely to fall victim to gun violence than whites, and Brown says that racial inequity is a big factor. “It’s more Black victims than white,” she said.

“I don’t like to put race in it… but it’s just like this society and the environment that we grow up in.”

Contrary to calls to defund the police, which have grown loud since last year’s killing of African American George Floyd by a white policeman, Brown would like to see more police action.

“It should be more police, more investigators, more of people taking the time out to – the police to visit the families or the mayor and all that,” Brown said.

No arrests have been made in any of her sons’ deaths, despite a bounty of $25,000 for information.

Brown says she doesn’t know why her sons were killed and investigators are not in contact with her.

While she wants those killings solved, she prefers to focus on moving on with her life.

“For me knowing is half the battle,” Brown said. “I just battle with what I’m battling with, just their death.”