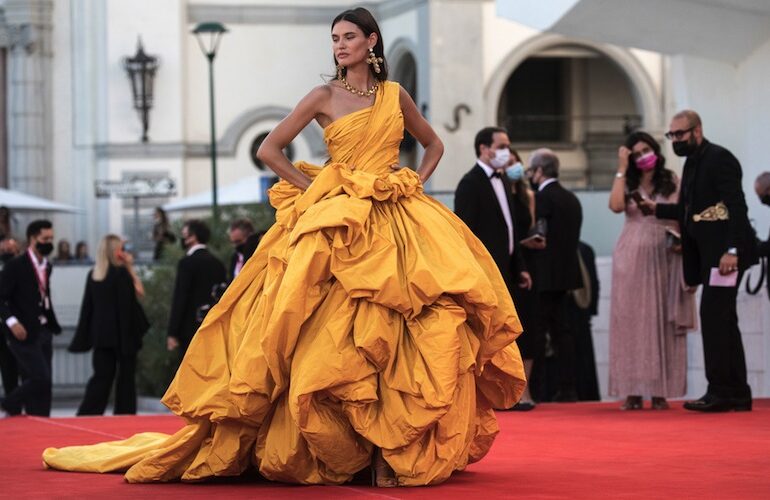 The Venice filmfest, which roared back to life on September 1 with a starry and feminist-tinged selection, concluded at the Lido di Venezia last evening.

The Golden Lion for best film went to Audrey Diwan’s French abortion drama Happenings. “I feel heard tonight!” a near-ecstatic Diwan said as accepted her historic award.
Happenings, an adaptation of the novel of the same name by Annie Ernaux, tells the story of a bright college student in early-1960s France who sees her emancipation threatened when she gets pregnant. With no legal options available, she tries to find a way to illegally abort.

The MeToo movement appeared to be making its mark on the film industry if the Venice premieres were anything to go by. The Venice filmfest closed with The Last Duel (playing out of competition), a medieval jousting drama starring Matt Damon and Ben Affleck that went heavy on its message of historical injustice towards women.
Slasher film Last Night in Soho, starring Anya Taylor-Joy, took a similar approach to Swinging Sixties London, revealing the misogyny beneath our nostalgia.
Other films at the festival – from French abortion drama Happening to Maggie Gyllenhaal’s unflinching look at motherhood in The Lost Daughter (starring Oscar-winner Olivia Colman) – suggested some progress in the effort to bring more female stories on celluloid.
One woman who seems destined to grab the headlines in the coming months is Kristen Stewart, who wowed critics at Venice with her turn as Princess Diana in Spencer.
Stewart is already picking up Oscar buzz, as is New Zealand director Jane Campion for her emotionally complex Western, The Power of the Do“.
Its star Benedict Cumberbatch is also being tipped for awards for his part as the conflicted cowboy at the centre of the film.
He praised Campion and the women’s movement ahead of the premiere last week, saying, “There’s such rich female talent to nurture and enjoy. Jane is such a key icon in that movement.”

There were 21 entries for the Golden Lion for Best Film, chosen by a jury led by Parasite director Bong Joon-Ho. Success at the Venice filmfest has become a key launchpad for Academy Award campaigns in recent years. The last four winners – Nomadland, Joker, Roma and The Shape of Water – have all gone on to Oscar success.
Last year’s edition was a low-key affair due to the pandemic, with even the winners (for Nomadland) unable to attend.
The glamour was certainly back this year, with a dazzling Hollywood guest list capped by the appearance of Affleck with his old/new girlfriend Jennifer Lopez to the delight of gossip mags everywhere.

Venice filmfest is also about the cream of the arthouse world, and the competition featured beloved cineastes such as Spain’s Pedro Almodovar (Parallel Mother) and Italy’s Paolo Sorrentino (The Hand of God) – both offering strikingly personal and heartfelt films.
There were also heavy-hitting dramas like The Box, which delved into the harsh world of Mexican sweatshops, and Reflection with its brutal look at the war in Ukraine.
There was lighter fare as Spanish megastars Penelope Cruz and Antonio Banderas made a rare appearance on-screen together, mercilessly ripping into their own profession as egomaniacal filmmakers in Official Competition.
Pandemic precautions – including mandatory masks, vaccine passes and 50-percent capacity in the cinemas – continued to dull some of the shine at this year’s festival.
Timothee Chalamet – in town to promote mega-blockbuster Dune – had to leap up the new COVID-19-security wall separating the public from the red carpet to give his adoring teen fans a bit of face time.
But with Dune bringing an army of stars to the Lido island – including Zendaya, Oscar Isaac, and Javier Bardem – it seemed to confirm that the festival circuit was back on glitzy form.

Contenders for the top prize

The Golden Lion, the top prize at the Venice filmfest, was chosen from 21 contenders, including:
Parallel Mothers: Spain, Mona Lisa and the Blood Moon: US, Another World: France, The Power of the Dog: New Zealand/Australia, America Latina: Italy/France, Happening: France, Official Competition: Spain/Argentina, The Hole: Italy/France/Germany, Sundown: Mexico/France/Sweden, Lost Illusions: France, The Lost Daughter: Greece/US/UK/Israel, Spencer: Germany/UK, Freaks Out: Italy/Belgium, The King of Laughter: Italy/Spain, On the Job: The Missing 8: Philippines, Leave No Traces: Poland/France/Czechoslavakia,Captain Volkonogov Escaped: Russia/Estonia/France, The Card Counter US/UK/China, The Hand of God: Italy, Reflection: Ukraine, and The Box: Mexico/US.

Italian director Roberto Benigni was awarded the Golden Lion for lifetime achievement at the Venice Film Festival. The festival’s artistic director Alberto Barbera praised Benigni saying few artists have his talent, comic timing, satire and huge acting ability.
Benigni dedicated the award to all the directors who believed in him.
“I thank all those who have loved me and simply believed in me from the very beginning, those who introduced me to the world of show business,” he said. “I come from a poor family, from nothing…so many people have helped me on this journey that has led me to this wonderful gift.”
Benigni, 68, was born in the Tuscan town of Misericordia and began his career in the early 1970s. He soon became one of Italy’s most popular actors and directors and with his 1999 Oscar-winning film Life is Beautiful, which he co-wrote, directed and starred in.
Benigni recently returned to the big screen playing Geppetto in Matteo Garrone’s live-action adaptation of Pinocchio. It was a box office champ in Italy in 2019, and has been recently released in the US by Roadside Attractions, besides being nominated for the 2021 Oscars in the costume design and makeup and hairstyling categories.