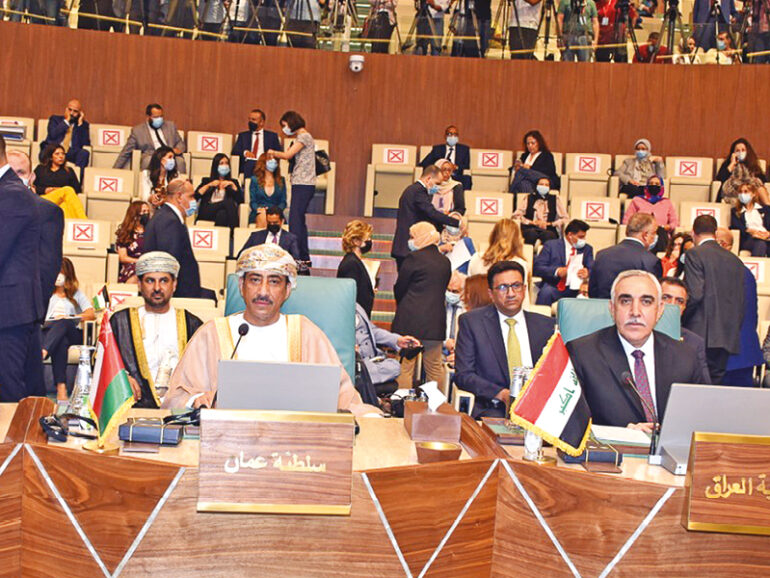 Cairo, Egypt – The sultanate has reaffirmed its permanent stand in favour of Arab solidarity and for all that serves the realisation of aspirations of the Arab nation.

In the its speech before the ministerial meeting of the 156th ordinary session of the Arab League (AL) in Cairo on Thursday, Oman expressed its staunch backing for the stability of the region through peace and settlement of disputes through understanding, dialogue and tolerance.

The meeting, which began under the chairmanship of Kuwait, saw the participation of the Arab League secretary general Ahmed Aboul Gheit.

Oman’s delegation was headed by H E Abdullah Nassir al Rahbi, the sultanate’s Ambassador to Egypt and its Permanent Representative to the Arab League.

“Oman is looking forward to the development of the Arab League’s performance in a manner that addresses the challenges and developments in the regional and international arenas, while at the same time cementing Arab joint action and invigorating Arab solidarity,” said H E Rahbi in the speech.

H E Rahbi stressed the need to address pending Arab issues, on top of which comes the Palestinian issue, and activating the peace process.

The Palestinian cause is the Arab people’s central issue, which lays emphasis on the Arab identity of Al Quds (Jerusalem) as the capital of the State of Palestine, the sultanate maintains.

On Yemen, Oman urged all parties to push for constructive dialogue with the prime aim of finding a peaceful solution and enhancing the efforts of Hans Grunberg, UN Special Envoy for Yemen.
The sultanate also underlined the significance of shoring up the unity of Libya and consolidating the pillars of stability of peace.

It called upon ‘all Arab brethren to rally the efforts of Libyan parties towards this objective’.

In its speech, Oman also expressed solidarity with Egypt and Sudan amid efforts exerted to resolve the dispute about the Ethiopian dam.

During their 156th Arab League meeting, Arab foreign ministers also discussed the topics of the agenda for the forthcoming period. Joint Arab action, the Palestinian issue, the Arab-Israeli conflict top the agenda, which address a cluster of international, political, economic, social, human and legal issues.