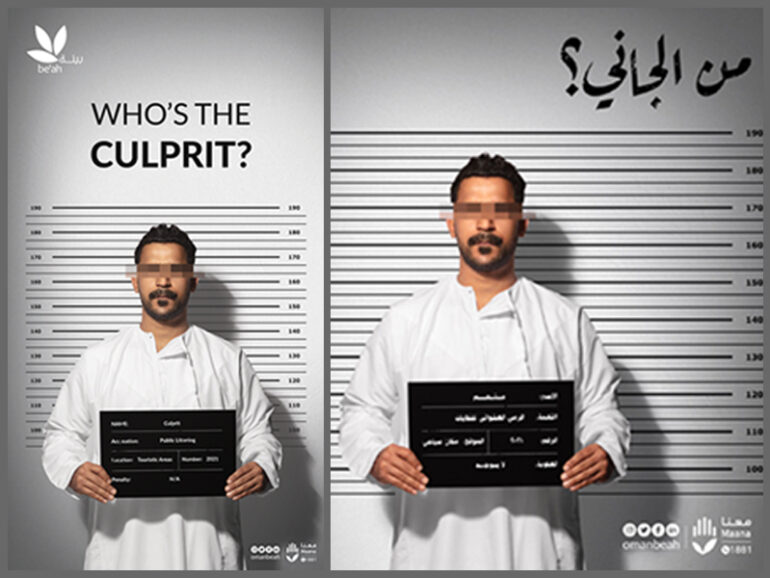 Started again from Dhofar governorate, this campaign aims to spread awareness on the importance of environment conservation and combating behaviours and practices that harm the environment, like improper waste disposal, be’ah said in a statement.

The campaign’s main slogan, ‘The culprit is still at large’ and hashtag #Wantedforjustice, reflect that littering is a punishable offence.

‘Launched in collaboration with several partners and community organisations, ‘Oman deserves’ is focused on the importance of keeping tourist destinations clean, as it has been repeatedly observed that visitors to popular destinations like Dhofar do not respect the environment. Such acts have led to resentment among members of the local community who, via social media, have called for harsh penalties on those responsible.  They have also stressed on the importance of deploying a special environmental police force at tourist destinations and identify violators in various governorates in general, and Dhofar governorate in particular.’

Commenting on the relaunch of the campaign, Anwar bin Yasser al Khanbashi, social outreach and engagement officer at be’ah said, “The second edition of ‘Oman deserves’ is part of the company’s efforts to raise environmental awareness and discourage acts that have negative impact on our environment. At be’ah, we are working on fostering a partnership with the community and are relying on public awareness on the importance of environment conservation. This awareness is one of the main pillars on which be’ah works to reduce harmful impact from wrong waste disposal practices and to encourage safe and proper waste disposal at tourist destinations.”

He added, “The campaign’s relaunch follows community resentment on irresponsible practices by some visitors to Dhofar  this year, which has been expressed on social media. We at be’ah believe in the importance of engagement with the community.”

Pollution remains a big challenge for the world as it contributes to global warming – one of biggest environmental concerns currently. Global warming is caused due to the presence of certain gases in the atmosphere (greenhouse gases) which allow light to reach Earth’s surface, but prevent heat from leaving, thus trapping it in the atmosphere.

‘The campaign initiated via the Hashtag #Wantedforjustice was first launched in March 2019 to educate people that littering was an offence. The campaign aims to prevent littering by socially ostracising offenders. It has been widely accepted by the community, and has achieved a remarkable success,’ added the statement.