Prajapati’s century in vain as Mumbai win to secure series 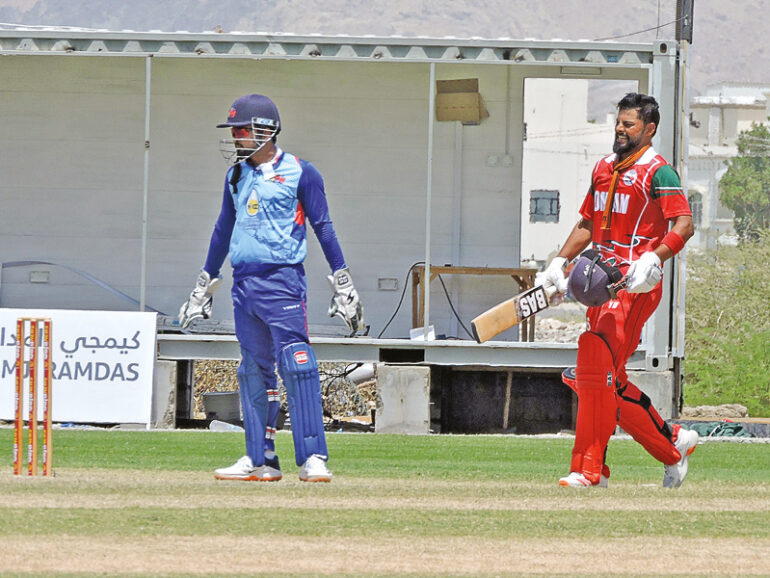 A stellar knock of 146 off 136 balls by Oman’s opening batsman  Kashyap Prajapati went in vain as the experienced Mumbai won the fourth and final one-dayer by four wickets to secure the four-match series 3-1 at the Oman Cricket Academy Ground on Friday.

Chasing a total of 249 to win, the visiting team reached the target in 46.5 overs, riding on three half-centuries from Aakarshit Gomel, Hardik Tamore and Sairaj Patil.

The match concluded a successful maiden tour of Mumbai team to the sultanate with the visiting team returning with a mixed bag of results,

Earlier, Oman managed to reach a challenging total, thanks to a solid century by Prajapati, whose knock was studded with five fours and nine sixes.

Nester Dhamba provided valuable support to Prajapati with a sedate 62-ball 32 and shared a 122-run stand with Prajapati. Rafiullah ‘s cameo in the end, 19 off four including three sixes, took the hosts to 248 for eight.

Oman fought back as they reduced Mumbai to 18 for two with the wickets of their key batsmen – Yashaswi Jaiswal and Armaan Jaffer. However,

Mumbai batsmen bounced back with contributions from Gomel and Tamore and then a valuable 92-run partnership between Patil (52 n.o.) and captain Shams Mulani (41) saw the visitors reach on the brink of win.

Speaking after the game, Prajapati said, “I went out to bat with a plan to play 50 overs. I am happy that I was able to build partnerships and contribute to our team’s total.”

Mumbai captain Mulani was delighted with the win that helped them clinch the one-day series after losing the T20 series.

“Thanks to Oman Cricket for inviting us and giving us the chance to play against such a good Oman side. The entire tour was wonderful and we enjoyed the hospitality of Oman and also were impressed with their indoor practice facilities.”

Madhu Jesrani, Oman Cricket (OC) secretary, said, “We are grateful to the Mumbai team for accepting our invitation and playing such wonderful cricket. They provided us great opportunity to prepare for the bigger games ahead.”

OC board member Alkesh Joshi said, “We are looking forward to raising Oman’s profile as dependable hosts of tournaments. Apart from the upcoming WCL Two and ICC T20 Cricket World Cup, we have also bid to host other tournaments. I am sure this wonderful cricket

infrastructure that we have built over the years will continue to serve the game of cricket.”