No vaccine, no entry – not everyone sees the light 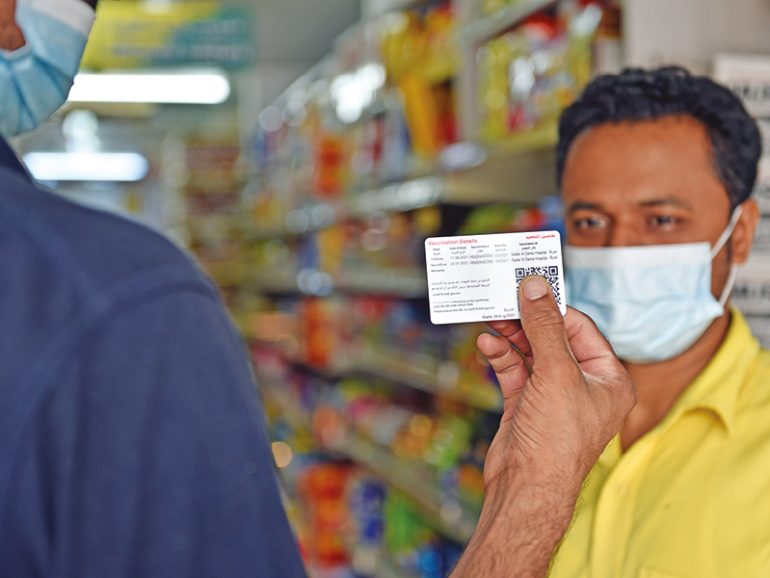 Confusion and chaos marked the first day of the mandatory vaccination rule on Wednesday, as a number of malls and supermarkets in the city were waiting for an official communication to this effect.

On August 19, the Supreme Committee tasked with tackling the impact of the COVID-19 pandemic had issued a set of decisions, such as removal of night movement ban, the opening of airports and mandatory vaccination to enter government offices and private sector establishments such as commercial complexes and restaurants, as well as attending cultural, sports and group events.

On Wednesday both the commercial centre staff and customers seemed struggling at entry points. Mall and supermarket officials are still waiting for any official communication from the relevant authorities. They said they were implementing the mandatory vaccination rule following media reports.

“We are yet to receive an official communiqué from authorities on the implementation of the rule. But we are implementing it as we saw messages from a few malls and banks informing that vaccination is mandatory for entry,” said a hypermarket official in Ruwi on the condition of anonymity.

He added, “We cater to many low wage-earning customers and not all of them have Internet all the time. Despite getting doses they could not produce any proof of the vaccination.”

An official of a mall in Bausher shared the same sentiments.

“We noticed many customers are not aware of how to download the vaccination certificate. So whatever they could produce like SMS or any other form of proof we cross-checked with their resident ID,” he said.

“We feel there is a lack of awareness with regard to carrying a proof of vaccination and we needed to form a separate team to man the entrances as it is an additional work for our security staff.”

The mall had to turn back a few customers, he said.

“We don’t want anyone to pick on us in terms of breaking the rule. So we are playing safe. We even put up a message across social media and we put up a poster as well at the entrance of the mall saying to enter the mall proof of vaccination is mandatory by law.”

Mohammed Nasir, a resident of Ruwi, said he was not allowed into a supermarket where he works as an outsourced cleaning staff on Wednesday morning.

He said he had approached a private hospital in Ruwi for the first dose of AstraZeneca vaccine but due to shortage he was asked to wait.

“On Wednesday afternoon I took the Pfizer vaccine at a private hospitals in Ruwi. I was waiting for an affordable AstraZeneca but due to fear of losing my job, I took Pfizer.”

People who were recently infected but have now fully recovered also faced difficulties in entering malls and other commercial centres. As per the rule, they cannot get vaccines immediately as there is a cooling period after recovery to get the vaccines.

“There is no clarity. Some say I need to wait for six weeks and some say 12 weeks to get my first dose of vaccine, and I am not even sure if I need to take two doses or one,” said an expatriate who had fully recovered but was not allowed to enter a supermarket to buy his daily grocery.

“The staff at supermarkets should be aware of such scenarios and authorities should issue clear guidelines covering all aspects of vaccine administration and the implementation of the rule,” he added.

Text and photo by Syed Fasiuddin