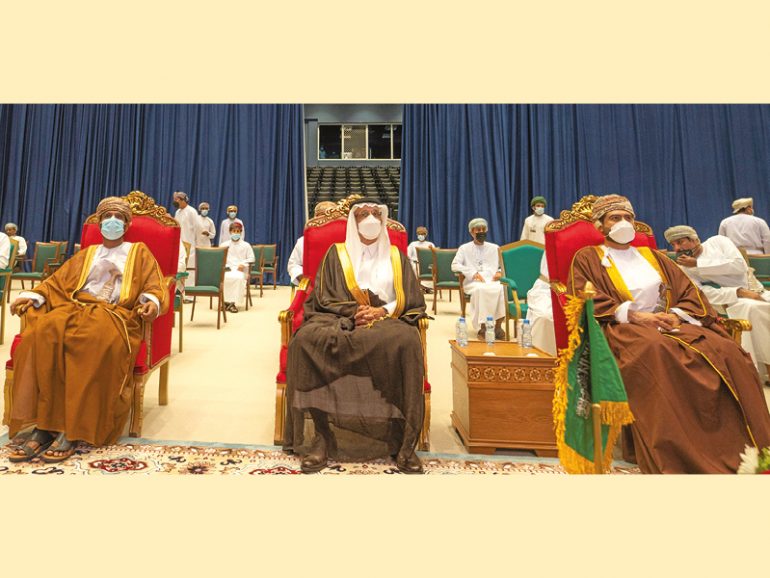 Eng Khalid bin Abdulaziz al Falih, Investment Minister of Saudi Arabia, accompanied by a delegation, visited the Public Establishment for Industrial Estates – Madayn at its headquarters in the Knowledge Oasis Muscat on Monday.

Welcoming the delegation, H E Dr Saleh bin Said Masan, Undersecretary for Commerce and Industry in the Ministry of Commerce, Industry and Investment Promotion, and chairman of Madayn’s Board of Directors, emphasised on the robust bilateral ties between the sultanate and Saudi Arabia and the significance of economic integration and trade relations.

H E Masan encouraged Saudi investors and businessmen to set up businesses in Ibri Industrial City, which is strategically located on the road leading to the new border between Oman and Saudi Arabia. “Ibri Industrial City will offer significant opportunities to Saudi industries targeting the Omani market and vice versa, and shall feature a variety of industries, most notably the logistics industry,” he said.

Talking about the Madayn, H E Masan said that the cities under its umbrella boast of running 2,200 projects over a total area of 140mn sqm with a workforce of over 62,000.

Moreover, the value of products by factories and projects based in the industrial cities exceeded RO3.7bn during 2020, with exports from these amounting to more than 73 per cent.

The high-profile Saudi delegation also got acquainted with Oman’s first tech park and Madayn’s technology arm – the Knowledge Oasis Muscat (KOM). The KOM is home to over 190 local, regional and global companies, institutions and organisations ranging from flourishing home-grown SMEs and leading higher education providers to thriving businesses capitalising on the KOM’s well-established reputation as a centre of excellence and opportunity.