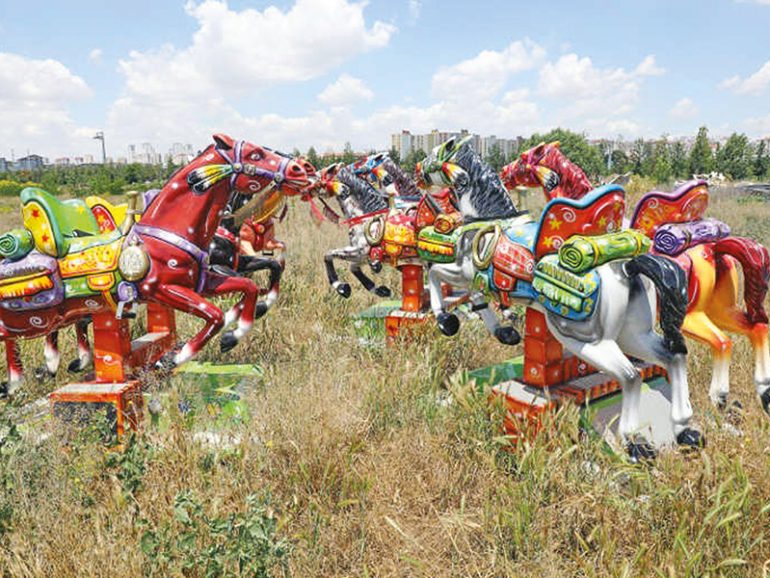 The decrepit Ankara theme park, which closed less than a year after it opened, tells a sad tale of Turkey’s turmoil

The problems started early for ‘Wonderland Eurasia’, meant to be Europe’s largest amusement venue and billed by Erdogan as ‘a symbol of pride’ at its opening in Ankara in March 2019. However,  just two days after the inauguration, a rollercoaster broke down, forcing people to scramble down to safety.

Public restrooms were a mess, some rides stood unfinished, and areas remained off-limits despite a reported US$801mn spent on building Turkey’s version of Disneyland. The park closed less than a year after it opened when the operator struggled to pay staff wages and electricity bills since there were not enough customers.

For Erdogan’s critics, the park is one of the biggest symbols of waste by mayors from his ruling AK Party, in power for two decades and facing a general election no later than 2023.

Such was the level of anger, some of Turkey’s biggest cities – including Ankara and Istanbul – voted for mayors from opposition parties in 2019.

“Ankara’s urgent need was not a Disneyland. It was transport,” said Tezcan Karakus Candan, who heads the Chamber of Architects’ Ankara branch, pointing out that the capital already has a large amusement park.

“This was a project of extravagance.”

The city is now suing the operator in an attempt to win back control and try to do something constructive with the land. An Ankara court will rule on the request on September 13.

The park itself stands eerily quiet, its broken toys and ride parts collecting dust and rotting at a waste site a few kilometres away. Yet its problems appear never-ending, with the city reporting at least 21 attempts to steal its cables in the last three months alone.

Ankara’s popular current mayor, Mansur Yavas, seen as a possible presidential challenger to Erdogan, claims the park cost $801mn. Former mayor, Melih Gokcek, however, puts the price tag at $500mn. But Gokcek is also blamed for many other hated Ankara projects he oversaw between 1994 and 2017, when he was ousted by Erdogan.

The park was a bizarre idea even before construction started, planned for a city not known for tourism. Gokcek claimed it would bring in 10 million people a year.

Ankara welcomed 4.9 million domestic and international visitors in 2019 before the coronavirus pandemic hit. In stark contrast, Istanbul, famous for its Ottoman mosques, Byzantine-era buildings and sunsets on the Bosphorus, hosted nearly 15 million tourists in 2019.

Guven Arif Sargin, a professor in the architecture department at Ankara’s Middle East Technical University, called the idea of trying to make the city attractive to tourists an ‘adolescent whim’.

The deep dislike of Gokcek and his tenure as mayor, despite five electoral victories, led to the opposition easily winning his office in March 2019.

“Melih Gokcek is a symbol of how AKP local administrations betray cities, how they ran a process of plunder and a network of relations,” said Candan.

“We shouldn’t look at Gokcek alone.”

The Chamber of Architects tried to use the courts to stop construction, arguing it unlawfully transformed a natural protected area into a place of business. The ex-mayor, however, countered with a legal complaint against Candan and four other heads of professional chambers in which he accused them of slander, she told AFP.

For many, Gokcek’s gravest crime was not the waste of a failed vanity project, but his destruction of the land it stood on – the Ataturk Forest Farm.

Ataturk envisioned the farming area in 1925 as the place where the capital’s residents would meet their future agricultural needs.The area where Wonderland Eurasia stands, once had a zoo open to the public. Erdogan also built a 1,150-room presidential palace worth more than $600mn on part of the land.

Sargin said the priority was to turn the park and its equipment into public property again. But Candan wants the area to fulfil Ataturk’s legacy, calling for radical action.

“Give the (park’s) toys away to regions that may need them, seek compensation from Melih Gokcek for the money spent, use that money to reforest the area,” Candan said. “With such decisions, it can return to its original state.”