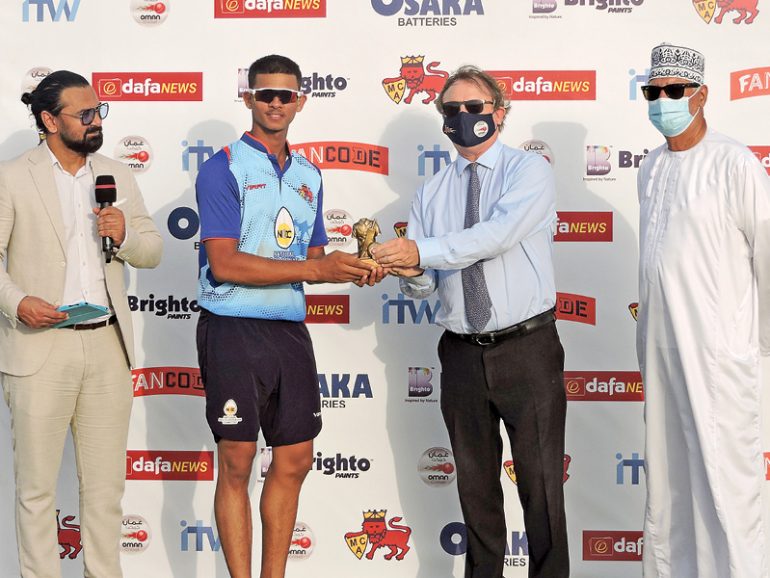 He is just 19 and a future star. A left-handed batsman with an immense potential, Mumbai’s Yashasvi Jaiswal displayed his talent in abundance at the Oman Cricket Academy Ground on Sunday.

Jaiswal, who has played for Rajasthan Royals in the IPL, showcased his vast repertoire of strokes during his knock of 82 in 79 balls to guide Mumbai to a four-wicket win against Oman in the first of the four-match 50-over series. Mumbai, coached by Amol Muzumdar, had lost the three-match T20 series to the hosts 1-2, but came back strongly in the opening 50-over game as they put in a vastly-improved allround display to dominate the match.

The four-match series is desired to serve Oman as a final tune-up ahead of the back-to-back ICC World Cricket League (WCL) 2 tri-series, at the same venue from September 13. Oman will take on Nepal and USA in the first tri-series and then play against PNG and Scotland in the second tri-series.

PNG and Scotland also feature along with Oman and Bangladesh in the first round of the T20 World Cup, starting in Oman on October 17.

On Sunday, having restricted Oman to a below-par score (196), Mumbai openers – Jaiswal and Aakarshit Gomel raced to a 60-run stand in just nine overs. Following Gomel’s exit, there was no respite for Oman bowlers as Hardik Tamore joined Jaiswal and he hit an unbeaten 51 to steer the visitors to victory in 43.4 overs. Jaiswal was on course for a century but was dismissed after he had struck five hits to the ropes and five sixes.

Shakeel Ahmad and Rafiullah took two wickets each for the hosts.

Earlier, Oman was bowled out for 196 in 47.1 overs. The bedrock of Oman’s innings was Khalid Kail, who struck 76 off 84 balls. Kail, who plays for Oman Stallions in the domestic league, had recently received the best batsman trophy in the Premier Division for his exploits last season as a Al Turki NMC player.

Kail continued his good form and hit four boundaries and one six and was ably supported by skipper Khawar Ali, who made 52. Mumbai skipper Shams Mulani was the most successful bowler, claiming three for 45.

Speaking after the defeat, Oman coach Duleep Mendis said that ‘these games against quality opposition are very useful’.

“We are learning a lot by playing these matches ahead of tougher challenges. For us to do well during the WCL and the T20 World Cup is the key. Defeats in these matches provide me, and my coaching team, a good idea on the areas where we need to improve upon,” he said.

Oman’s next match of the series is on Tuesday before the teams play back-to-back games on Thursday and Friday.