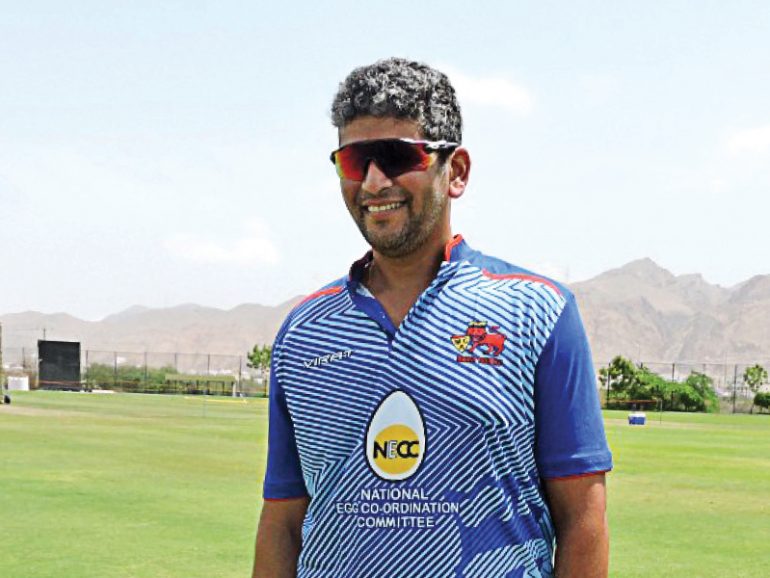 His Twitter account profile reads “Cricket is my life, thinking and talking about it, my passion…! Teaching it now, what drives me.” And this is exactly what Amol Mazumdar is doing nowadays. Talking about cricket, thinking and now teaching.

His exquisite drives during his playing days were a treat for the eyes, and though Amol Muzumdar never got a chance to make it to the Indian team, his prolific first-class career over two decades saw him obliterate many batting records only to be better known as ‘one of the best who never played India’. That tag line hardly is a matter of ‘regret’ for the present Mumbai team coach, who is in Oman with the India’s domestic cricket giants, for a two-week tour.

In an exclusive chat with Muscat Daily on Saturday, Muzumdar said, “It has been a fantastic week so far in Oman.  We were pleasantly surprised by the infrastructure at the Oman Cricket Academy Ground. Oman is hosting the ICC T20 World Cup in October so the facilities are expectedly top-class.”

The visiting Mumbai team concluded the three-match T20 series on Friday with Duleep Mendis-coached Oman winning the series 2-1. Mumbai will now play a four-match 50-over series, beginning on Sunday.

Having watched Oman play three T20 games against his boys, Muzumdar was ‘impressed’ with the hosts’ talent.

“They have some good bowlers and couple of good strikers of the ball. It is evident that the boys have put in a lot of hard yards over the years under coach Duleep [Mendis].

“I am sure that this team [Oman] is a result of last few years and the coach has worked hard to get this squad and talent together. I definitely have seen some talent in Oman team.”

The 46-year-old Muzumdar, considered to be one of the best batsman of his times on the Indian circuit, led Mumbai to a Ranji trophy title in 2007 and moved to coaching in 2013.

A former India U19 and U23 batting coach, he was also a batting consultant to the Netherlands and a batting coach of Rajasthan Royals IPL franchise for nearly four years. He was named Mumbai coach in June this year and is on his first overseas assignment with his boys since taking over the reigns.

Following Oman’s victory in the T20 series, Muzumdar said, “Oman’s strength is bowling. They have a couple of decent medium pacers and the bowling attack has a variety. No wonder, they opted to bowl first whenever they won the toss against us.

“Besides a good medium pace attack, they have a left-arm spinner and a leg-spinner. Overall, their strength is bowling.”

On Oman’s chances to make it to the Super 12s in the T20 World Cup, the Mumbai coach said, “As a host nation, there are both advantages and pressure. The Oman players are used to climatic and ground conditions. So, they would have that advantage, but playing at home also brings in pressure and it is important to see how the players react. Knowing the ground well does give them an advantage.”

He added, “Oman definitely have a chance to advance but at the World Cup, it is a matter of close margins.”

Muzumdar said that ‘it is very important for players to play more matches ahead of such big events’.

“The more games the better and Oman should play preparatory matches against quality opposition. Nothing can beat a match practice. One may train for hours and hours but it is crucial to play games to see the results and the way they handle the match pressure,” he added.

The Mumbai stalwart said that India will go into the T20 World Cup as one of the favourites as almost all the players would be featuring in the IPL just ahead of the global showpiece.The IPL 2021 will resume in the UAE on September 17 and conclude on October 15.

“They [Indian players] will be in a great position to play the T20 World Cup purely because IPL finishes just before the World Cup. It will be a great practice for the players and all the players who will be part of the IPL will get a good hang of it. Besides India, I think the teams to watch out would be Pakistan, New Zealand and England. New Zealand does well in ICC events and England’s brand of cricket has been phenomenal of late,” he said.

‘No regrets, only few disappointments’

If one puts in a Google search for the best Indian cricketer never to have played for the country, among the top names to crop would be invariably of Amol Muzumdar.

Having garnered more than 11,000 runs in domestic cricket with 30 centuries and with a batting average of around 50, Muzumdar said that he ‘doesn’t regret’ on missing out on an India cap but admitted there have been ‘few disappointments’.

“I gave it my all, gave my best. For me, the ultimate joy was to play cricket. It didn’t matter where I played or for whom. Be it in Netherlands or at Wankhede, I gave my best,” he said.

He added, “I was really consistent during the period between 1993-1999 and then between 2003-2008. Looking back, I think I was lucky to be playing during a superb era of Indian cricket. We had some of the greatest players the game had ever seen. So, no regrets.”