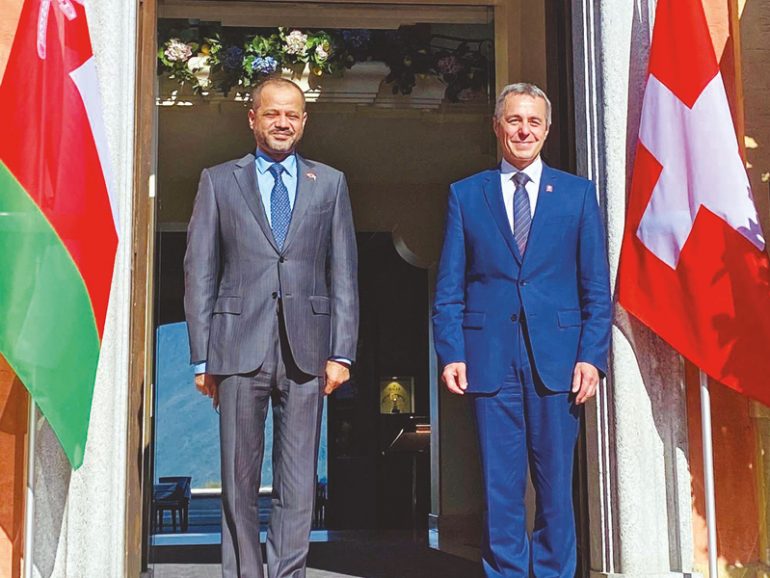 Cooperation for peace and stability and recent developments in the Middle East were the focus of talks between H E Sayyid Badr bin Hamood al Busaidi, Oman’s Foreign Minister, and Ignazio Cassis, Swiss Federal Councillor and Foreign Minister, when they met on Monday in the city of Lugano in Ticino.

As part of an official visit to the Middle East in April, Cassis visited Oman, ‘which is an important partner for Switzerland in the region, especially in terms of peace and stability’, stated a Swiss Federal Department of Foreign Affairs press release.

During talks held on Monday with H E Sayyid Badr, the head of the Federal Department of Foreign Affairs reiterated Switzerland’s willingness to support dialogue between countries of the region. “Only through dialogue,” explained Cassis, “is it possible to ease tensions and improve security in the Middle East.”

“After my visit to Oman last spring, I am glad to welcome H E Sayyid Badr in my hometown Lugano. Both Switzerland and Oman play a key role as bridge builders. Together, we will work to strengthen peace and stability in the MENA region,” tweeted Cassis.

Switzerland and Oman pursue a neutral foreign policy and are both known for their good offices and role as mediators in conflicts. ‘They support efforts to revive the peace process in Yemen and to improve relations among the conflicting states in the region,’ stated the Federal Department.

The ministers also discussed potential opportunities for Swiss companies in Oman and furthering the dialogue that begun in the spring on cooperation in the areas of healthcare and vocational education and training for young people.

Technical-level meetings between Swiss and Omani delegations have already been scheduled for the run-up to the World Expo in Dubai from October 2021 to March 2022.