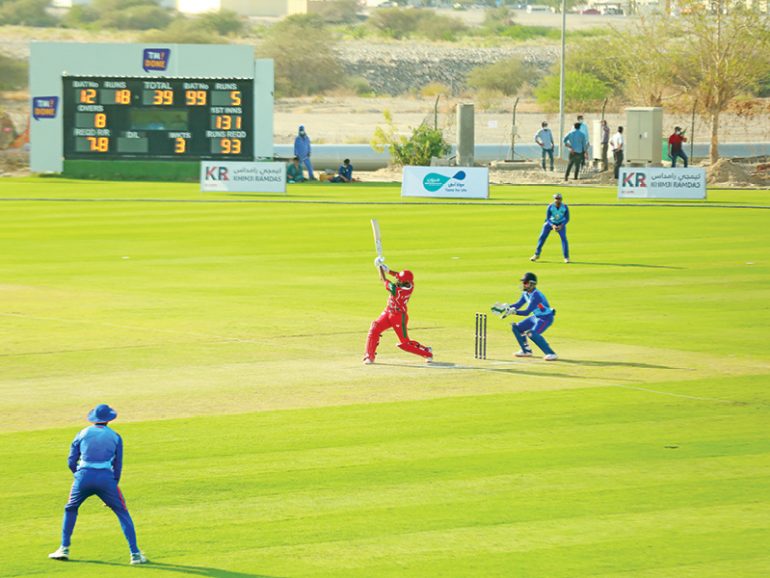 Oman’s preparations for the T20 World Cup is on the right track as the hosts scripted a thrilling two-wicket win over the visiting Mumbai side in the first of the three-match T20 series at the Oman Academy Cricket ground on Tuesday.

Mumbai, considered to be one of the best domestic and decorated cricket teams in India, is on a tour to Oman to play three T20 and four 50-over-a-side games.

The matches are meant to prepare the Oman team, coached by Sri Lanka’s Duleep Mendis, for tougher challenges ahead as they gear up for the World Cricket League Two tri-series in September-October and the T20 World Cup, which begins in Oman on October 17.

On Tuesday, Muhammad Naseem Khushi blasted 39 off just 12 balls, including five sixes, to lead the hosts to win.

Captain Zeeshan Maqsood laid the foundation for Oman’s tricky chase of 132 with a solid 50 off 39 that included four sixes.

Earlier, Mumbai was restricted to 131 for nine with Aakarshit Gomel top-scoring with 33 and Hardik Tamore making 23. Oman’s new ball bowlers – Mohammad Nadeem and Kaleemullah – put Mumbai under pressure by taking early wickets. Maqsood’s left-arm spin fetched him two wickets as the hosts didn’t give away much to their opponents. Oman’s chase was stuttering at 88 for five in 13 overs but Khushi’s blitz saw the team through in the 19th over.

Speaking after the game, Maqsood said that ‘the team had worked hard and was enjoying playing in home conditions’.

“We have had a long summer and boys are in great shape after months of training. Mumbai bowled exceptionally well to put us under pressure but I knew we had the players to take the fight deep and Khushi finished the game in style,” said Maqsood.

The two teams will lock horns in the second T20 on Thursday and the third on Friday The 50-over matches will be held from August 29-September 3.