Oman bow out with a win 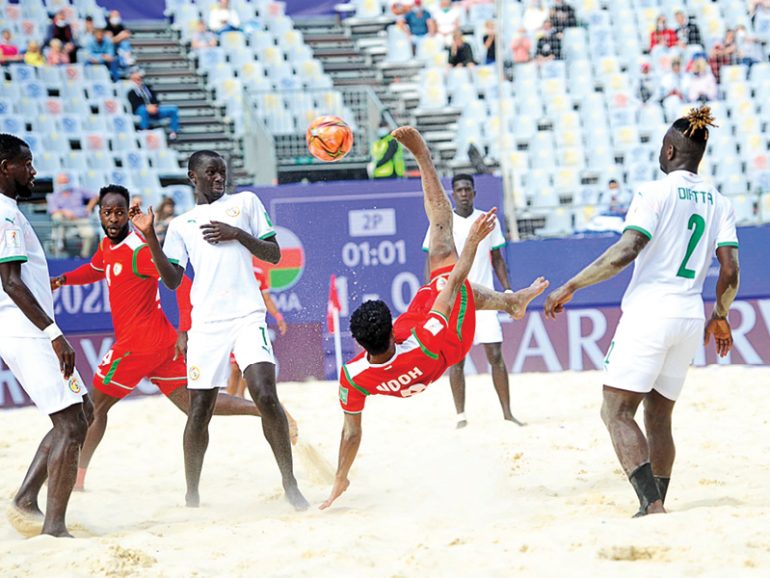 After two successive defeats which ended their hopes for a knockout spot, Oman concluded their FIFA Beach Soccer World Cup Russia 2021 campaign on a winning note with a 3-2 victory against Senegal in a Group D match at the Luzhniki Beach Soccer Arena in Moscow on Tuesday.

Talib Hilal-coached Oman was making their fourth World Cup appearance and had impressed in their earlier matches but failed to garner any points.

On Tuesday, with nothing to lose, Oman went all out and were finally rewarded for their efforts against a Senegal side, which had already confirmed their quarterfinal spot ahead of the match.

Oman took the game to Senegal and dominated possession from the kick-off.

Khalid al Oraimi, Salim al Oraimi and Nooh al Zadjali all came close to scoring for Oman in the opening five minutes, while Senegal had Raoul Mendy threatening at the other end.

Senegal, however, suffered a blow when they were left with a man down in the eighth minute following Pape Mar Boye’s dismissal and Oman took advantage from the resultant penalty with Abdullah al Sauti’s cool finish.

Oman maintained their aggressive approach in the second period but it was Senegal who came closest to scoring with Amadou Ba’s effort right after the restart and Ninou Diatta’s free-kick in the 14th minute.

Oman did well to contain Senegal’s advances before doubling their lead in the 24th minute when Mushel al Araimi set-up Yahya al Araimi to score his first goal of the tournament.

The start of the third period saw a more aggressive Senegal and their persistence finally paid off with Ibrahima Balde’s fine effort in the 25th minute.

Senegal responded through Ninou Diatta but it was not enough to rattle Oman as they held on for the win.

Earlier on Sunday, Oman made Uruguay work hard before conceding a 2-4 defeat. As they did in their opening match defeat to Portugal (3-5) on Friday, Oman produced another valiant performance as they came from 0-2 down to draw level before Uruguay struck in the closing seconds to walk away winners.

The defeat against Uruguay ended Oman’s hopes of advancing to the quarterfinals.

The win over Senegal was only the third at the global stage for Oman under Talib, who has led Oman to all the four World Cups. In the previous three World Cup appearances, Oman had recorded only two wins.

Their maiden victory was against Costa Rica 7-2 in Portugal 2015 and their second was in Paraguay in 2019 when they beat Nigeria 6-5.

Oman made their debut at the FIFA Beach Soccer World Cup in the Italian city of Ravenna in 2011.

Under Talib, who has been the helm of the national beach soccer team since 2008, Oman have won the Asian Beach Games gold in 2008 and also were champions at the AFC Beach Soccer Asian Cup in 2015.