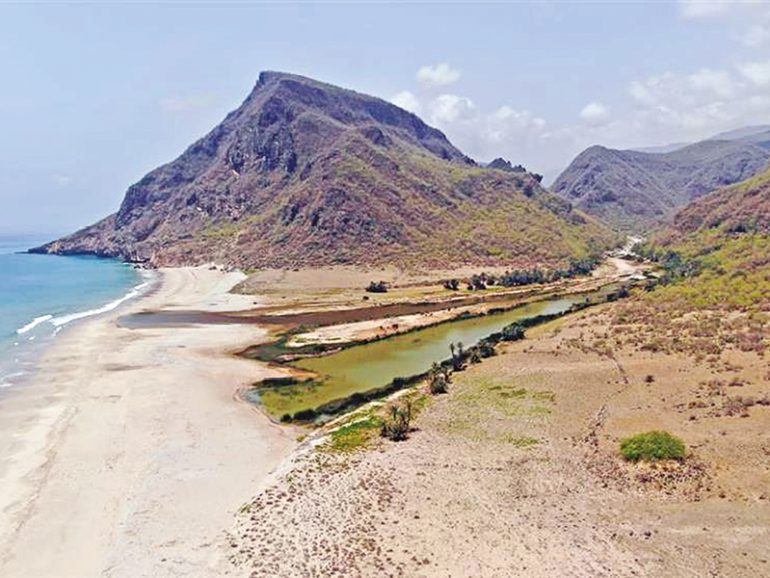 The Khor Kharfout Archaeological Reserve between Rakhyut and Dhalkut in the Governorate of Dhofar found a much-needed prominence as a bio-diversity hotspot after a Royal Decree (No. 58/2021) on Monday ordered its establishment.

Running along the coast of the Arabian Sea, the newly designated archaeological reserve is spread over an area of 143.4km2, and is affected by the annual monsoon rains (khareef) and subtropical climate.

According to a statement, this unique climatic condition provides rich biodiversity and a habitat for 20 types of mammals, 193 types of birds, 20 types of reptiles, 183 types of plants, in addition to hundreds of types of invertebrates such as insects, spiders, and others. The area is characterised by mild summers with maximum temperature ranging between 14-34°C, and a relatively short and cold winter with minimum of 14°C.

A mountain range dominates the overall topography of Kharfout reserve, notably in the northern slopes of Wadi Saiq in the form of grooves, furrows and steep cliffs. This gives the reserve a unique terrain ranging from mountainous hinterlands of forests and grasslands to a semi-arid land running to the coast.

The northern and northwestern sections of the reserve are bedecked with stones and gravel.

The reserve also boasts of a lagoon overlooking the Arabian Sea characterised by a picturesque watery bay. This provides an exceptional habitat for migratory birds, and an important destination for hiking and recreation enthusiasts, including bird, turtle and dolphin watching, and fishing.

The reserve is also famous for its vast grazing plains and wild trees in addition to the availability of rich water sources. It is believed that the Khor was used as an ancient port for the export of frankincense. ‘There are also a number of evidences and monuments that may tell the historical and cultural role of this area that has not yet been studied,’ the statement added.