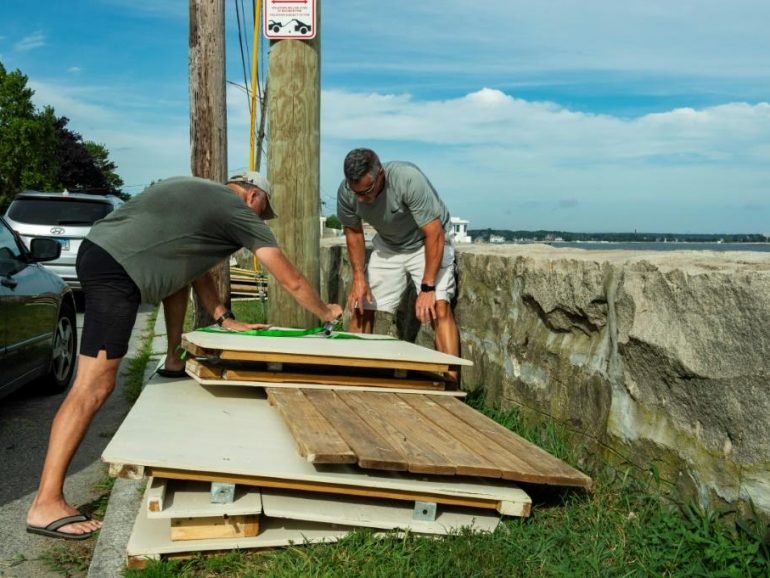 Tropical Storm Henri slammed into Rhode Island on the US east coast Sunday, knocking out power to thousands of Americans, canceling scores of flights and bringing record rainfall.

The storm — earlier downgraded from a Category 1 Hurricane — hit land near the town of Westerly at approximately 12:15 PM (1615 GMT), the National Weather Service said.

Henri is a rare tropical storm to hit America’s northeastern seaboard and comes as the surface layer of oceans warms due to climate change.

Millions of residents in New England and New York’s Long Island had been told to prepare for violent winds, possibly days without electricity and storm surges of up to five feet.

Rhode Island Governor Dan McKee said there was “significant flooding” in areas. Initial reports from locals indicated that the storm was not as bad as some of the projections, though.

“We dodged a bullet,” James Kiker, a resident of Newport, Rhode Island, told AFP, saying he saw only “minimal damage” in his area, including a few broken branches.

Residents on Long Island, home to the plush Hamptons villages where wealthy New Yorkers retreat in summer, expressed relief that the storm’s path had skirted east of them.

“I will continue to stay alert as still plenty of wind, rain and surging seas await us but I am breathing a little easier,” Amy Pedatella, a 46-year-old property manager who spent Saturday securing seaside homes in the Hamptons, told AFP.

More than 79,000 people lost power in Rhode Island and another 24,000 suffered blackouts in Connecticut, according to the tracking website poweroutage.us.

Before the downgrade, Henri was set to be the first hurricane to hit New England in 30 years. A swath of the northeastern coastline, including New York City, was under alert as the storm approached.

Nasty weather that preceded Henri late Saturday forced New York City to halt a star-studded Central Park concert billed as a “homecoming” for a metropolis hard hit by the pandemic.

The approaching then-hurricane had prompted Cuomo to announce a state of emergency and the deployment of 500 National Guard soldiers in anticipation of response efforts.

The National Weather Service said 1.94 inches of rain fell on Central Park between 10 pm and 11 pm Saturday, the wettest hour on record in the Big Apple.

An announcer cut off pop legend Barry Manilow mid-song to urge revelers to proceed swiftly but calmly to the nearest exit.

“I guess for safety it makes sense. I mean I can hear the thunder,” said attendee Maria Fuentes.

Henri is expected to produce three to six inches of rain (7.5 to 15 centimeters) across the region, with isolated maximum totals near 10 inches, the NHC warned.

The heavy rainfall “may result in considerable flash, urban, and small stream flooding” as well as river flooding.

The last hurricane to make landfall onto New England was Hurricane Bob in 1991. That storm killed at least 17 people.

It has been almost a decade since the region last had hurricane watches, with Hurricane Irene in August 2011.

The last hurricane to make landfall in Long Island was Gloria in 1985.

The US PGA Tour postponed the final round of the Northern Trust tournament in suburban New York to Monday because of Henri.