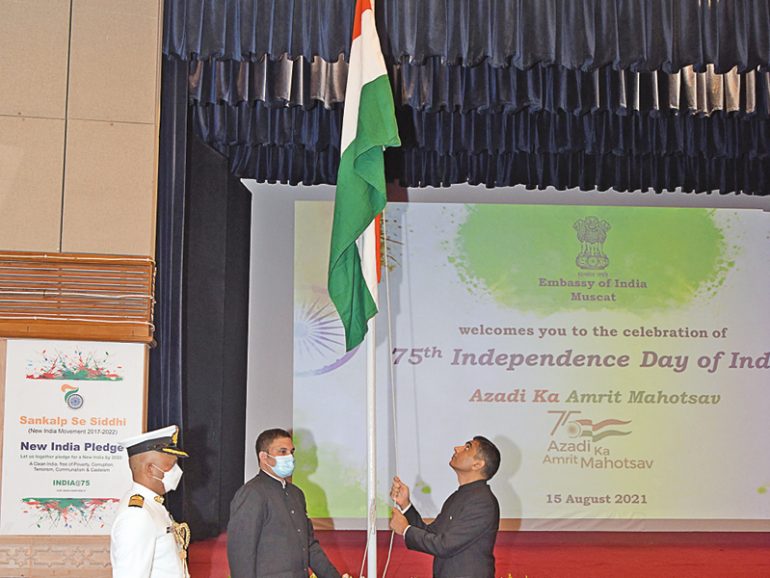 The 75th Independence Day of India was celebrated in Oman with great enthusiasm and patriotic fervour on Sunday.

India is celebrating the momentous occasion as ‘Azadi ka Amrit Mahotsav’. The Amrit Mahotsav wasinaugurated by Prime Minister Shri Narendra Modi in March 2021 and it will continue till August 15, 2023.

The embassy building was lit up in tricolour on the eve of Independence Day. A flag hoisting ceremony was organised in the embassy in the morning in hybrid format owing to COVID-19 restrictions. Embassy officials and staff attended the event physically in the embassy, and was telecast live enabling the Indian community to join the celebration virtually. Before the start of the main event, videos on Amrit Mahotsav, a global painting competition launched by Indian Council for Cultural Relations (ICCR), an Odissi dance performance and patriotic song were played.

The event started with unfurling of the Indian flag by H E Munu Mahawar, Ambassador of India to the sultanate, followed by singing of the National Anthem. The ambassador delivered a speech and read out excerpts from the address of the President of India.

He greeted the Indian community in Oman and thanked them for their contribution in supporting India’s fight against COVID-19. The ambassador noted that ‘Azadi ka Amrit Mahotsav’ means celebration of elixir of energy of independence and inspiration from the warriors of freedom movement. He encouraged everyone to be a part of India’s growth story and the journey towards self reliance and propagate India’s message of peace and development.

Videos of patriotic songs and dance by students of Indian School Muscat and Indian Social Club were played after the speech by ambassador, adding to the sense of pride and enthusiasm in the celebration. A video of a message by Dr S Jaishankar, External Affairs Minister of India, and glimpses of the celebration organised by ICCR were played at the end of the event.