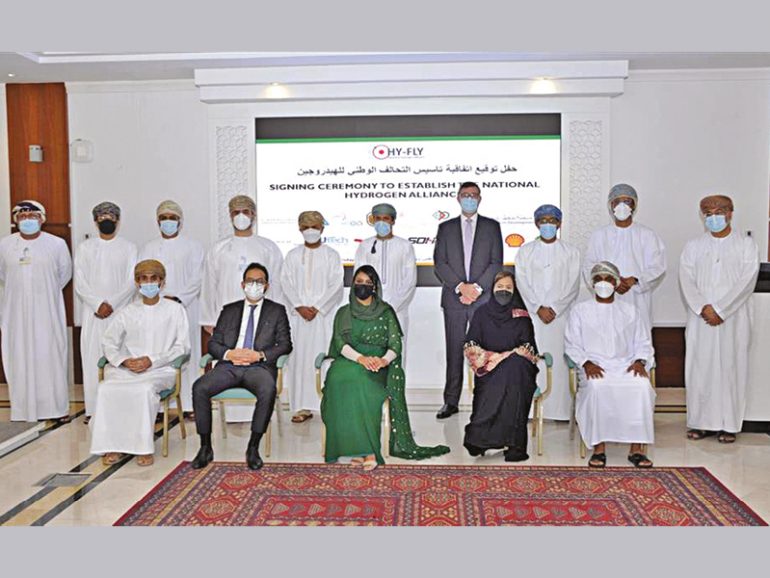 Oman has set up a national hydrogen alliance- called Hy-Fly – to place the sultanate firmly on the world map for the development and deployment of clean hydrogen.

Hy-Fly is made up of key public and private organisationswho will work together to support and facilitate the production, transportation and utilisation of clean hydrogen for domestic use and export. In the run up to achieving this, the alliance will promote clean hydrogen through investments, technologies, policies, and expertise across the entire hydrogen supply chain.

This will support national energy security, decarbonisation, and ultimately a successful transition to green economy.

The alliance is seen as a milestone in Oman’s drive to diversify its energy mix while addressing the mounting climate change realities. Hydrogen is believed to have a significant potential to cut greenhouse gases in the sectors responsible for global emissions.

H E Salim al Aufi, undersecretary in the ministry, said, “Oman has a reputation as an established, well-connected and reliable energy producer and exporter, and the country is well placed due to its climate, geo-strategic position and its know-how to drive the shift towards renewables and green hydrogen.

“The aim of Hy-Fly is to create a leading national and international industry and a government/public authority alliance to drive the development and deployment of clean hydrogen in line with Oman Vision 2040’s Energy Diversification Plans.”

The establishment of Hy-Fly comes as one of the outcomes of the ongoing Hydrogen Economy Feasibility Study that is being governed by a ministry-led Steering Committee, constituting various government entities and energy companies.

Steve Phimister, managing director of PDO, said, “Over time, hydrogen has the potential to help transform the domestic and global energy sector, alter the way we all produce and consume energy, and address carbon emissions locally and around the world. We are committed to playing a key role in this alliance for hydrogen to drive a pivotal change as we transition to a greener, more sustainable and diversified economy, in line with Oman Vision 2040.”

According to Dr Salim al Huthaili, CEO of OQ Alternative Energy, Oman is very well positioned to take a leadership role in the global energy transition stage through partnership and collaboration. “Green hydrogen is becoming the molecule of choice to bridge the demand gap as economies continue to grow. This alliance will unify the efforts to build capabilities, share best practices and set the tone for global alliances.”

Also on the occasion, Haifa al Khaifi, Interim CEO of Energy Development Oman, said, “EDO welcomes the creation of Oman’s hydrogen alliance – Hy-Fly. EDO has indeed defined an ambitious vision to become a leading player in Oman’s energy transition and is therefore committed to be a driving force in the alliance.”

She informed that global demand for low-carbon blue or green hydrogen is expected to increase significantly over the next 20-25 years, driven by decarbonisation efforts in industry, transportation as well as in power and heat. “Oman has the opportunity to become a major player in future hydrogen markets thanks to its high renewables and carbon capture, utilisation and storage potential, its competitive natural gas production and its geo-strategic position. The establishment of Hy-Fly is a major milestone to ensure Oman develops an ambitious national hydrogen strategy, roadmap and ecosystem.”

Describing clean hydrogen is one of the decarbonisation solutions BP aims to provide to its customers in support of its new strategy to scale-up low-carbon energy businesses, Mohamed al Najwani, VP of wells at BP Oman, said, “Earlier this year, we announced several clean hydrogen projects in Europe and the UK. By joining this alliance, we are looking to support Oman in its energy transition strategy and explore opportunities in clean hydrogen.”

Dr Hussain al Salmi, acting rector of GUTech, said, “We are committed to and aligned with Oman Vision 2040 – Renewable Energy Strategy. We continue to be active pioneers and supporters of hydrogen-related initiatives in Oman, especially green hydrogen. We believe that forming the national hydrogen alliance is a positive step in bringing key stakeholders together and that more stakeholders will be added in the future. This alliance gives the industry a discussion platform and a united voice which will help in the development of hydrogen strategies in Oman.”