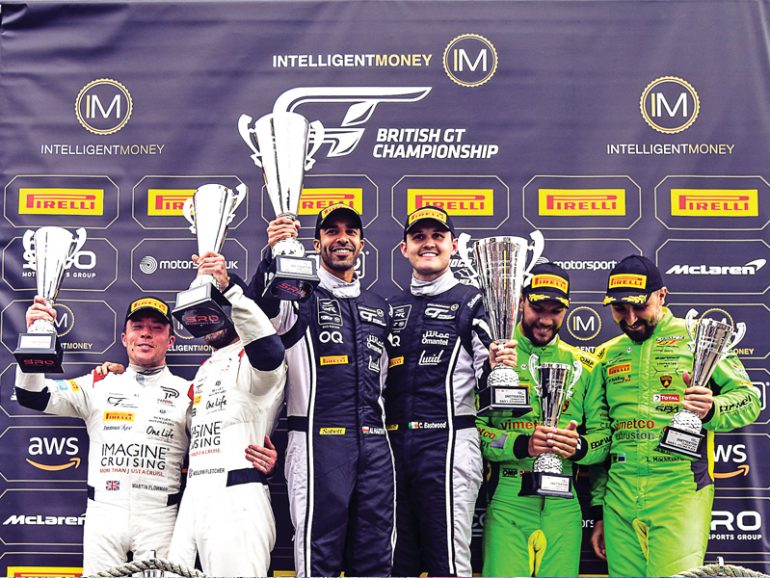 The absence from the track circuit for more than five months had little bearing on the experienced Oman racer Ahmad al Harthy as he made a triumphant return to the circuit with a win in round five, with his teammate Charlie Eastwood, of the 2021 British GT Championships at the Snetterton 300 circuit on Sunday. It was a sensational display by the Oman Racing duo with a dazzling lights-to-flag win in round five.

Prior to his participation at the weekend, Ahmad had competed in February during the Asian Le Mans Series in Abu Dhabi.

Both Ahmad and Eastwood had entered fifth and sixth rounds of the British GT as guest entry as  this was their one-off participation in the series this season. Ahmad was also making a return to British GT after a gap of six years and the Omani starred after converting a richly deserved pole position into a tremendous race win in the 60-minute contest. In round six, the duo finished fourth.

In addition to making headlines with victory on Oman Racing’s long-awaited return to British GT, success for the TF Sport engineered No 97 Aston Martin Vantage GT3 also marked the first ever race win in the category for Irish driver Eastwood.

From sixth on the grid in a wet-and-drying race two later in the afternoon, Ahmad and Eastwood combined to deliver another outstanding showing.

Eastwood produced an awesome start, leaping into fourth and climbing as high as second during the early running. Even with a ten-second success penalty from race one, due to winning, Ahmad was just as impressive and took the flag in fourth.

“It is a dream start to my season with our new partners, new sponsors, and everyone at Oman Racing,” said Ahmad. “I’m so happy and proud to represent Oman and our partners, and delighted to win in our first race back in British GT.

“We’ve all been working so, so hard over the winter and the early part of this year to put together our programme and this is the perfect start. The team gave me such a beautiful car to drive, the guys at TF, Charlie [Eastwood] and I have all worked so hard these past weeks. I’m delighted with our results this weekend and hope to officially announce our next races very soon.”

Light rain did threaten ahead of round five on Sunday morning but it soon passed, and the action got underway on a fully dry track. Making a textbook launch at the rolling start, Ahmad led away from his expertly taken pole position. He led by a lap when he pitted at the end of lap 13 to hand over the car to Eastwood and the Irishman joined the race with 34 minutes to go.

When the order settled his lead was five seconds over the Bentley, and Eastwood took the chequered flag at the end of the hour, 8.2 seconds clear to seal a fantastic victory for Oman Racing in its first race back in British GT since 2015.

Round six started on a wet track and Eastwood, from sixth on the grid, did a tremendous job off the rolling start by surging into fourth place early. He handed the car to Ahmad at sixth place, who produced a bold pass around the outside on lap 19 to seal fifth position into the chicane. Two laps later Ahmad moved to take fourth and finished P4 for a successful return to British GT.

“P4 was the best we could hope for in round six, especially having to spend an extra ten seconds in the pits as a success penalty for our round five win,” said Ahmad.