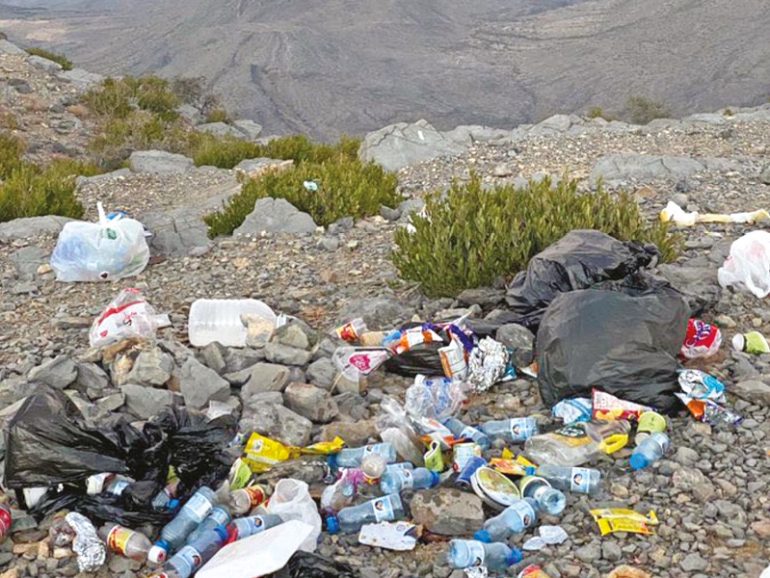 Incidents of littering in two different places in Dhofar have evoked a strong reaction among people on social media.

Two citizens brought to the Dhofar Municipality’s notice, through social media, the instances of throwing food and a plastic bottles.

Hamad al Habsi, who posted a video on Twitter, said, “Someone has thrown a whole meal with plates, a bottle of water and soda cans without opening them. It’s a waste of money and damage of nature as well.”

Ahmed al Shanfari posted a photo on Twitter of an incident of dumping plastic bottles.

He wrote, ‘All attempts toraise awareness during the past years have proven to be unsuccessful. It has become necessary to issue a law that fines the violator an amount of RO100. Responsible authorities must use drones and also conduct patrolling on foot to monitor and record any violations. That way we will preserve our environment and also create employment opportunities.’

“Responsible authorities must use scouting teams and volunteers to spread awareness on the importance of preserving the environment during the autumn period. Preserving nature is everyone’s responsibility. Fines must be severe to deter violators,” he said.

Mohamed Jadad on Twitter said, ‘Environmental police has become an important requirement for all governorates, especially for the Governorate of Dhofar, to deter those who do not care about the cleanliness of the place; who do not remove their waste or those people who destroy nature by drifting to green areas.”

Hamad al Busaidi , another Twitterati, said, ‘Unfortunately,  throwing trash in natural places has become very frequent. Some people should learn that natural sites and parks belong to everyone and not just to a few. Authorities should take action against the violators.’

Dr Ghazi al Rawas, tweeted, ‘Environmental police may be the best solution to prevent these practices that exhaust the environment, such as killing wild animals, logging, burning or leaving waste, or drifting in green spaces. Unfortunately, littering can be seen in Jebel Akhadar and Dhofar mountains.’

Meanwhile, Dhofar Municipality has said the competent authorities have identified the person who appeared in the video circulated on social media as he was throwing a plastic bottle in the green areas.

Officials fined him RO100, in addition to taking legal measures against him.

Other violations were detected, for which legal measures will be initiated, the municipality stated.