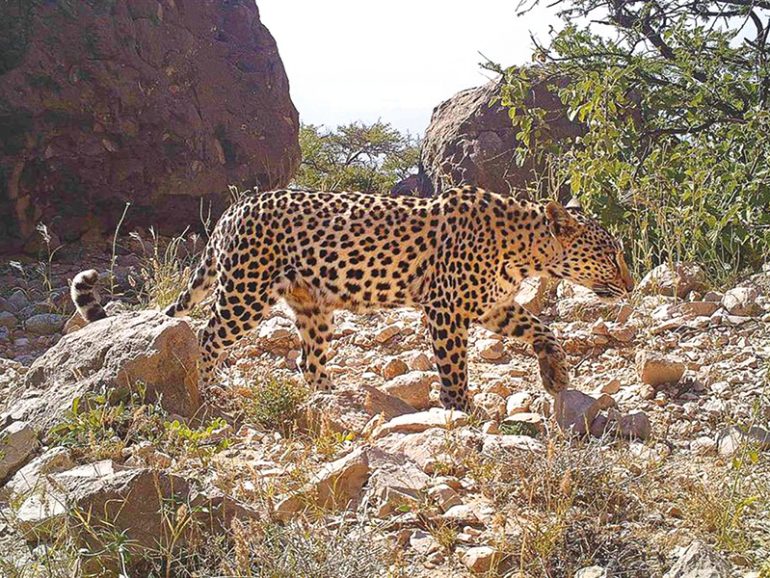 The Environmental Authority has once again recorded the presence of the Arabian leopard in the mountainous area of Najd located north of Salalah in Dhofar governorate.

In a statement the Environmental Authority said the presence of the ‘critically endangered’ animal in Dhofar was documented by using trap cameras.

In November 2020, the Office for Conservation of Environment (OCE) in the Diwan of Royal Court detected the first scientific evidence of the presence of the Arabian leopard in two different locations in the west of the wilayat of Dhalkut in Dhofar.

The OCE confirmed the breakthrough study – conducted by its specialists using a number of modern techniques, including trap cameras – indicates rich biological diversity of the area.

The study also reveals the presence of seven other species of wild mammals such as Arabian wolf, porcupine, lynx, striped hyena, honey badger, mongoose and rock hyrax that inhabit the region. The animals are listed as endangered or vulnerable to extinction according to the classification of the International Union for Conservation of Nature (IUCN).

The Arabian leopard has been classified by IUCN as critically endangered.

There are less than 200 big cats in the wild and according to studies conducted in Oman, there are only 44 to 58 of them in the country.

Field studies carried out by the OCE for 23 years have confirmed the presence of the Arabian leopard in the mountains of Dhofar, ranging from Hasik in the east to the wilayat of Dhalkut in the west, in addition to sightings in Najd, north of the Dhofar Mountains.