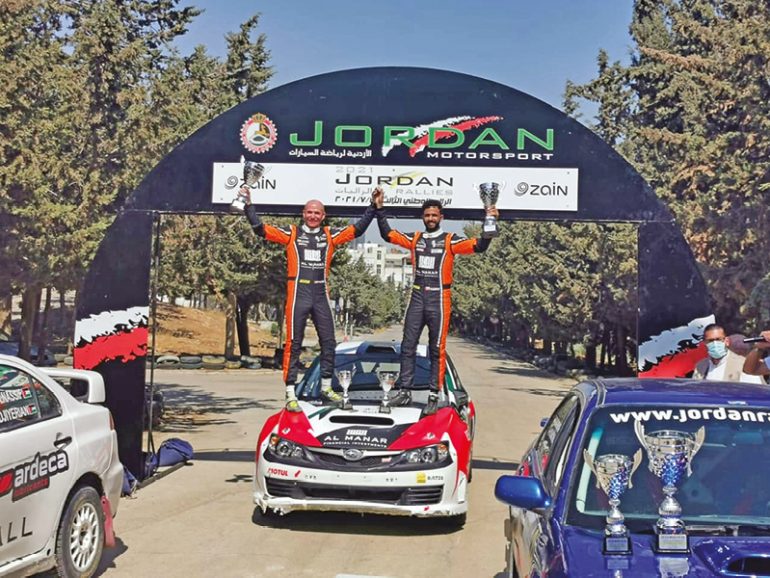 Top-seeded and former winner Abdullah al Rawahi secured a morale-boosting win in the third round of the Jordan National Rally Championship 2021 near Dead Sea in Jordan, on Friday.

Teaming up with his experienced and long-time co-driver Ata al Hmoud of Jordan, the duo claimed the title in their Subaru Impreza ST1 N14 nearly two and a half minutes ahead of Jordanian duo of Youssef al Asmar and Nabil Kayyal, also in a Subaru Impreza.

The championship featured a competitive grid of 13 cars and 11 of them finished the rally.  Rawahi dominated the rally winning all the four stages to win the rally in a time of 40.39 minutes.

Speaking after the win, Rawahi said, “I’m delighted to win in Jordan along with my co-driver Ata [al Hmoud]. After my disappointment during the Jordan Rally in the Middle East Rally Championships (MERC) in May [engine breakdown], I was determined to come back and get a good result here.

“It is a great feeling to have achieved it. A victory in a rally outside Oman is full of challenges. To overcome it with a top position is definitely I will cherish for a long time.”

The 24 year old Oman’s rally star added, “The rally in Jordan offers a difficult challenge as the terrain is very different around the Dead Sea area, especially in Nebo. I am proud to fly the flag of sultanate high and I hope to bring further glory for the sultanate.”

Rawahi and Hmoud were overall Jordan National Rally champions in 2019 and the duo was seeded No 1 for this round.

It was a nice comeback for Rawahi after he retired during the Jordan Rally MERC due to a to a broken engine earlier in May.

The third round of Jordan National Rally featured quite a few former champions  including Asmar and Khaled Juma, who was forced to retire on Friday.