Barakat, Khanjari bow out with their heads held high 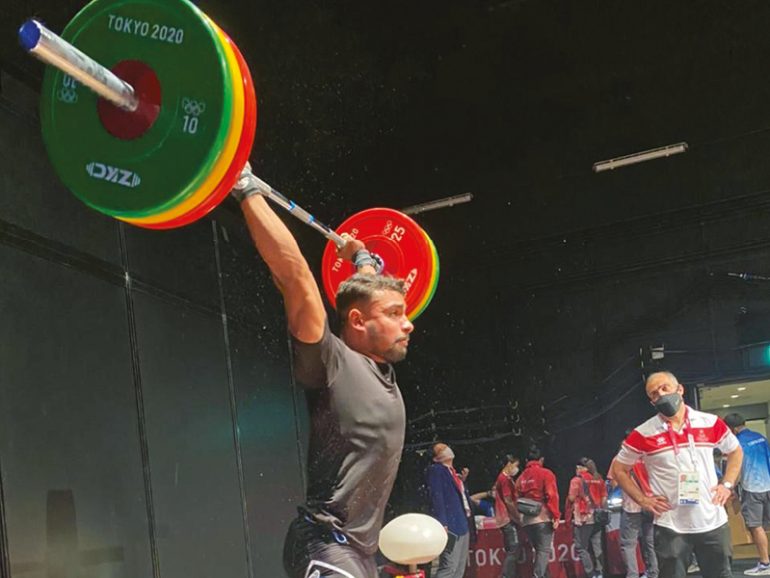 The results were on the expected lines for Oman. The sultanate athletes are not in medal contention in any of the events they are competing. The hope of the athletes themselves, and of the Oman Olympic Committee (OOC), is that they improve upon their personal best records and learn from the experience of participating at the world’s greatest sporting spectacle.

On Saturday, Oman athletes featured in two disciplines – athletics and weightlifting. While the 33 year old Barakat al Harthi is a seasoned campaigner, taking part in his third successive Olympics, it was baptism by fire for the 20-year-old Amur al Khanjari, who was making his debut in the Group B event of the 81kg class.

Unflustered by the grand stage at the Tokyo International Forum, a young Khanjari put in his best performance so far to lift 140kg snatch in his third attempt and then 177kg in clean & jerk for a combined 317kg, a personal best. His previous best total was 313kg at an Arab championship earlier this year.

He finished second in his group behind Albania’s Erkand Qerimaj (338kg) and was placed overall tenth in the competition after China’s Xiaojun Lyu bagged the gold with an Olympic record of 374kg (170kg in snatch and 204kg in clean & jerk).

Later Khanjari said, “I am proud to make my Olympics debut and come up with my personal best lift. It was a great experience and I will now start preparing for the 2024 Paris Olympic Games. I hope to get the desired backing to ensure good results in future.”

Barakat’s early morning 100m race on Saturday saw the former Asian bronze medallist win the preliminary round heat two with his season-best time of 10.27s and qualify for the first-round heat later in the day.

Earlier, this season, Barakat had recorded his best of 10.37s at a pre-Olympic training camp in Turkey. Following his season-best time, Barakat was lined up in heat five of the first round that had two of world’s leading sprinters in the heat – Canada’s Andre de Grasse and American Fred Kerley.

Barakat failed to repeat his early morning timing as despite a strong start he could clock 10.31s to finish sixth among the nine competitors.

Interestingly both the races that Barakat ran on Saturday witnessed disqualification of a sprinter due to a false start.

Grasse won the race with his season-best time of 9.91s followed by Kerley with 9.97s to advance to the semifinals. Kenya’s Ferdinand Omurwa was third qualifier with 10.01s. In fact, Grasse was the fastest qualifier in the seven heats featuring 46 athletes. Barakat’s timing ranked him at 41st spot.

Speaking after the round one heat, Barakat said, “To achieve my season-best time at the Olympics is a satisfying feeling. I thank my coach Mohammed al Hooti, who has been with me for long camps ahead of the Games.

“The round one heat was very tough with some of the world’s fastest runners in my heat. I am proud to have represented Oman at three successive Olympics and I am hopeful of using this experience in my career ahead.”

Earlier on Friday, Oman’s other sprinter, Mazoon al Alawi, competing in 100m women’s race, clocked a disappointing 12.35s to make an early exit as she finished sixth in the heat.

This was her second successive participation at the Games. Her timing on Friday was much below her recent performances during the preparatory camp in Turkey where she had recorded her personal best in April with a time of 11.84s, which was also the new national record.

Following the exit of Olympic debutant swimmer Issa al Adawi, who took part in the 100m freestyle last week, and now the departures of Barakat and Mazoon along with Khanjari, all that is left for Oman in Tokyo 2020 is experienced shooter Hamed al Khatri’s campaign in the men’s 50m rifle 3 positions on Monday at the Asaka Shooting Range.

Eight of the 50 shooters will advance to the final round.