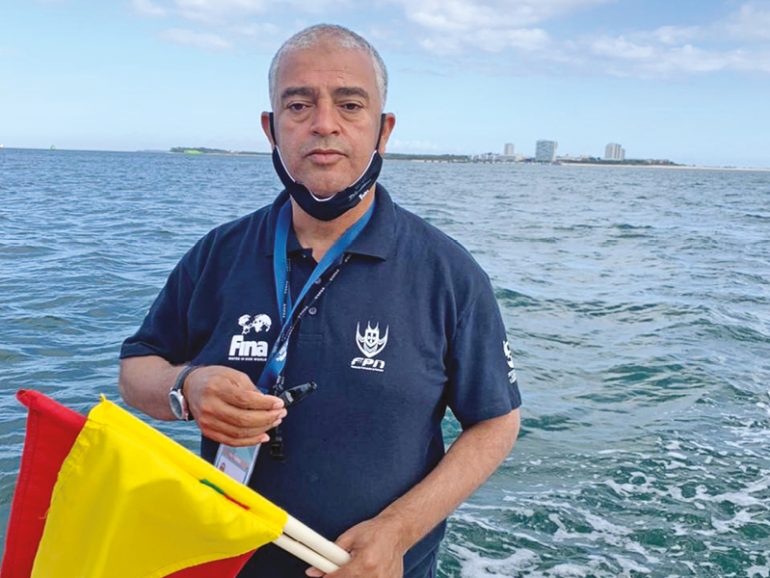 In a rare honour, a first for an Asian and an Arab official, Oman’s Abdulmonem al Alawi has been named the chief referee at the Tokyo 2020 Olympic Games marathon swimming for the women’s 10km event.

Alawi, who is attending as a FINA (world swimming body) official for the second successive Olympics, will be the chief referee for the race that is due to be held on August 4.

A long-standing member of the FINA Technical Open Water Swimming Committee, Alawi was an assistant referee at the 2016 Rio Olympics in the 10km women’s marathon.

Alawi was first elected to the FINA committee in 2013 and this is the first time that an Arab and an Asian official has been appointed as the chief referee at the Olympic Games marathon swimming.

Marathon swimming (open water) was first introduced at the Olympics in 2008 at the Beijing Games.

Alawi was delighted on receiving the confirmation of his appointment and told Muscat Daily on Wednesday from Sur ahead of his departure to Tokyo on Saturday that he was ‘proud and honoured’ to be the first Asian and an Arab to be handed such a big responsibility.

“This [appointment] means a lot to me. I have been officiating in swimming events since 1986 and I believe this is like climbing Mt Everest summit  – to be named the chief referee at the Olympic Games. I thank the Oman Swimming Association (OSA), Oman Olympic Committee and the FINA for their support over the years,” said Alawi.

The official, who has been also an OSA board member, hails from Sur city and has over the years officiated more than 150 domestic, regional and international competitions after receiving the FINA referee badge in 1995.

Meanwhile, the national shooting coach Sultan al Rusheidi has ‘high hopes’ from his experienced marksman Hamed al Khatri, 36, who will be competing in his second successive Olympic Games in the 50m rifle three positions.

Khatri’s qualifying round will be held on August 2 and the shooter is currently training under Rusheidi in Japan.

“Following the confirmation of Khatri’s invitation card for Tokyo, he has been undergoing daily training sessions. He has good experience, having won the competitions at the Gulf and Arab levels. I am confident, and I hope, that he can improve upon his personal best score at the Games,” said Rusheidi.

Mazoon will compete in the 100m preliminary heat three on Friday.  Mazoon’s personal best is 11.84s and at Rio Olympics in 2016, the sprinter did advance to the next round. She is expected to repeat her Rio performance. Barakat is scheduled to race on Saturday.

Amur al Khanjari, 20, the sultanate’s other Olympic debutant, will be in action in the 81kg Group B event also, on Saturday, at the Tokyo International Forum.