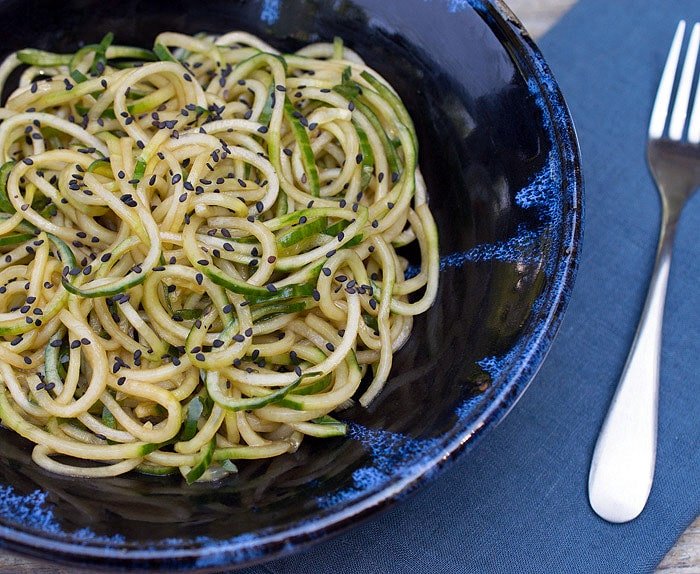 Make your summer lunches or dinners really cool. How about cucumbers for main course? You read that right – don’t dismiss cucumbers as just an ingredient for salads, they can be used in multiple creative recipes as starters, main course, and even desserts. Consider some really cool cucumber recipes for the hottest days in Oman:

Use a spiraliser to cut the cucumbers into neat spirals resembling noodles. If you do not have a spiraliser, try this – Cut off the ends of the cucumber and pierce a bamboo skewer right through the centre, from end to end. Now, beginning at one end of the skewered cucumber, place your knife at a slight angle from the cut end and cut down till the knife touches the skewer. Rest the blade firmly against the skewer and continue cutting spirals by turning the cucumber. Follow the first cut and keep the spiral as thin as possible, until you reach the other end.

Place your cucumber noodles in a large bowl, drizzle sesame oil, rice vinegar, soy sauce and sriracha and toss until evenly coated. Taste and adjust sauces, as needed. Sprinkle sesame seeds and refrigerate for 30 minutes before serving. You may add steamed shrimps or shredded chicken as an interesting garnish.

For the cucumber bites:

For the balsamic glaze:

Add balsamic vinegar and sugar to a small saucepan and place over medium high heat. Bring mixture to a boil, then reduce to medium low and simmer for 15-20 minutes, stirring until the balsamic vinegar turns into a thick syrup like consistency. Remove from heat and set aside. (If the mixture hardens up after removing from heat, just reheat it over a low heat.)

In a bowl, add the tuna, pesto and freshly ground black pepper and combine well. Place about 1tbsp of tuna-pesto mixture on each cucumber round. Top with a mozzarella ball, half cherry tomato, and a basil leaf. Secure the assembly with a toothpick. Serve on a platter, drizzled with balsamic reduction and serve immediately.

Dab the cucumber strips gently with a paper towel to absorb excess moisture. Gently spread about 1-2tsp of cream cheese along the length of the cucumber. Press a strip of smoked salmon on top of the cream cheese, then roll the cucumber up as tightly as possible. Secure each roll with a toothpick, if they don’t say rolled up on their own.

Grind together all the spice powders, ginger garlic paste, vinegar and coconut to form a smooth paste. Heat oil in a wok, add the curry leaves followed by the onions, when the onions get translucent, add the tomatoes and fry for a minute. Cover the lid and let it cook on medium flame for two minutes. Then add the ground coconut paste and continue cooking for 10 minutes, covered, on low flame. Add 1 cup water and let the curry boil for 4-5 minutes. Meanwhile, cut each cucumber into half and place them on a hot grill till the skins get slightly charred stripes. Slice the cucumber halves into  semi-circular wedges and add to the boiling curry. Let it simmer for 5 minutes. Serve hot with steamed rice.