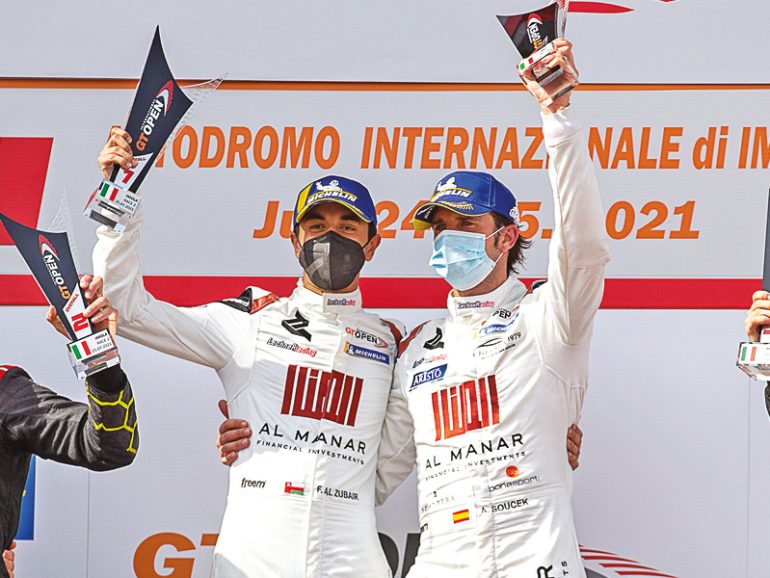 It was one of the days that Oman’s Al Faisal al Zubair will remember for a long time in his motorsports career.

A sensational run by the 23 year old Omani and his Spanish teammate, Andy Soucek, ensured their second race win of the season in the second race of the fourth round of the 2021 International GT Open Series at the Imola circuit in Bologna, Italy, on Sunday.

During the 2021 season, there have not been many occasions when drivers have rallied from a sixth spot in qualifying to a race win. But on Sunday, this is what the Lechner Racing duo did to seal an amazing victory in their Porsche 911 GT3 R car at the Autodrome Enzo e Dino Ferrari motor racing circuit.

The victory was sealed by Soucek in a perfect race, clinching the one-hour 35-lap race by 1.507secs, ahead of  Vincenzo Sospiri Racing Lamborghini’s duo of Michele Beretta and Frederik Schandorff.

For Al Faisal, it was a successful comeback to the series after missing the third round in Hungary due to illness. The Omani-Spanish duo had claimed a third-place in the opening race of the fourth round on Saturday.

Speaking after the thrilling victory, cheered by his father Khalid al Zubair at the circuit, Al Faisal said, “Qualifying for me didn’t go the best way as I qualified in sixth. But in the race, in the first stint, I overtook the Mercedes to go to P5 and there was a bit of contact ahead and then I moved into P4.

“From there, I maintained the gap and came into the pit early for a perfect pit stop for Andy [Soucek] to go on new tyres.

“Andy then did a great job. I think we struggled for pace a little bit as compared to the Mercedes and the Lamborghini. Nonetheless to come with a third on Saturday and a win in race two was way more than we expected for the weekend. It was the best way to get into the summer break.”

Al Faisal and Soucek had won their first race of the competitive series at the Spa-Francorchamps circuit in June.

On Sunday, Al Faisal, managed to push up to P4 from his P6 start behind Schandorff, Spinelli and Ollie Millroy after three laps. The quartet held station through the next 11 laps with the Lamborghini heading the Mercedes by 2.723s heading into lap 16 and Millroy’s McLaren by 7.227s.

Al Faisal was replaced by Soucek for the final 32 minutes with the Lechner Porsche now down in seventh place. Spinelli snatched the lead from Schandorff when the leading Lamborghini pitted for Beretta to take over and Soucek climbed to fifth place heading into the remaining 29 minutes.

Spinelli’s pit stop enabled Millroy to snatch the lead and Soucek found himself in fourth behind the McLaren, Spinelli and Agostini’s Audi R8.

Soucek took further gain on his rivals’ pit stop strategies and stormed into second place on lap 19 at the expense of Beretta and Spinelli. He then went for the leading McLaren into the final 25 minutes of the race and snatched the lead when Millroy pitted and was replaced by Brendan Iribe.

Al Faisal’s teammate then headed into the last five minutes of the race, with 31 laps completed, defending a slender lead of 1.893s. The Spaniard managed to hold on to pass the chequered flag and secure a thrilling victory for Lechner Racing by the margin of 1.507s.

Action resumes in the series at Austria’s Red Bull Ring in September.