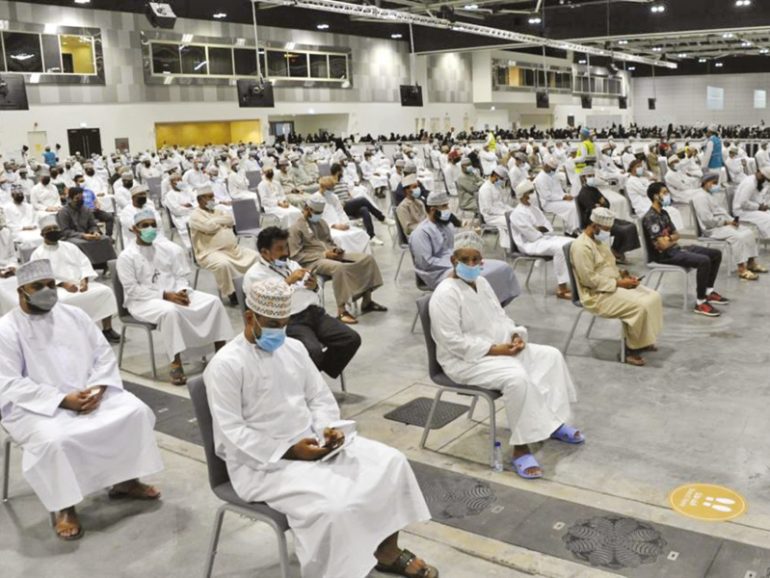 53 per cent of target population vaccinated till Sunday

Nearly 2mn people in Oman have been vaccinated against COVID-19, according to the latest figures released by the Ministry of Health (MoH).

A total of 1,926,307 people, representing 53 per cent of the target population, had been vaccinated till Sunday.

The Governorate of Muscat has the highest vaccination rate, with a total of 618,264 people vaccinated and acoverage of 55 per cent of the target population, followed by North Batinah with 234,808 people (39 per cent) and South Batinah 153,277 people (45 per cent).

The vaccination campaign in Oman started in December 2020 for those above the age of 65. The campaign has since been expanded to include all over 18.

MoH encourages all to get vaccinated. ‘There is more demand for vaccine now than in the past,’ it said in a statement.

Around 3mn doses of vaccines are expected in August and September, MoH has stated.

The number of COVID-19 daily cases dropped to 572 on Monday. The Ministry of Health also stated that 18 deaths were reported in a 24-hour period on Monday. ‘The total number of cases registered in the sultanate has now reached 294,526, including 3,771 deaths,’ MoH said.

Fifty-three patients were admitted to hospitals in a 24-hour period on Monday, taking the total number of inpatients to 723, including 292 in intensive care units. The total number of recoveries now is 276,483 and recovery rate 93.9 per cent.