Sur limps back to normalcy after rains 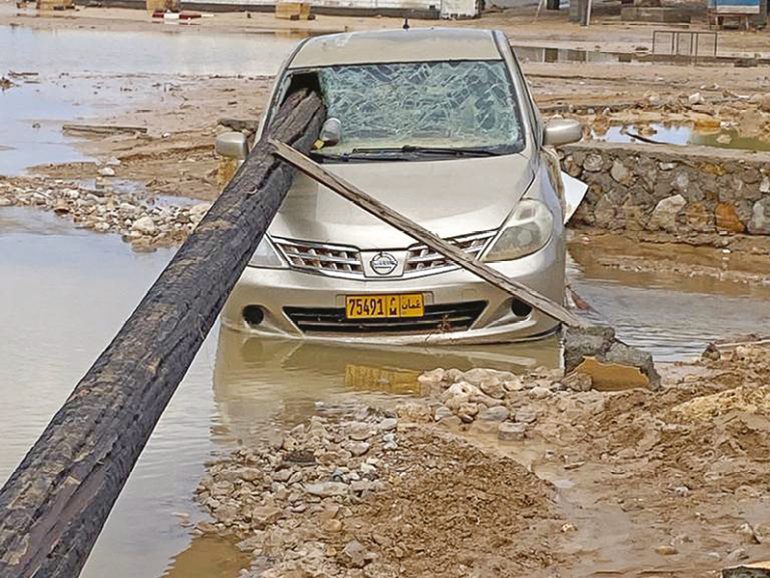 Last week’s heavy rains and thunderstorms caused severe damages in North Batinah and South Sharqiyah, with Sur being the worst hit. Damages to public and private property and vehicles in the wilayat were significant.

Despite the disruptions, cooperation between voluntary and government teams has helped overcome the problems of the residents in the wilayat.

Ghailani informed that Sur Dam was full to the brim. Its water overflowed and entered some homes in the Sabakh and Bilad Sur area. “More than a hundred families were affected by the rains. Parts of homes caved in and furniture were destroyed. These families were evacuated to safe places. Water and electricity was also cut off in some parts of Sur.”

“Residents of Sur have called on government agencies to change the residential plan in Sabakh because the area is always affected following rains which cause flooding and destruction.”

The department provided shelter in six hotel apartments to 84 families, including 501 individuals, in Sur, South Sharqiyah.

Mundhiri informed that 43 families, including 374 individuals, were evacuated and sheltered in four centres in the wilayats of Liwa and Shinas in North Batinah.

The families will remain in the shelters until their homes are renovated, and they are given financial compensation this week.

Efforts will continue to help the affected families, providing them electrical appliances like air conditioners and refrigerators, and beds and other furniture.

According to Mundhiri, the Relief and Shelter Sector works around the clock to help families affected by rains anywhere in the sultanate.

Following the rains and overflowing wadis, the Civil Defence and Ambulance Authority (CDAA) swung into action as a large number of people were stuck in wadis or flooded areas.

An official source in CDAA said, “On July 16, our teams in South Sharqiyah rescued 31 families during heavy rains.”

Also on the day, rescue and evacuation operations were conducted in Bilad Sur in South Sharqiyah where several homes were affected by heavy rains.

On July 17, rescue teams evacuated 75 people in Shinas when the water level rose around their homes. The people were transferred to shelter.

On July 18, CDAA teams rescued two families, including 11 individuals, who were stuck in the wilayat of Liwa in North Batinah. On the same day, five people were rescued from Wadi Falaj al Qabail in the wilayat of Sohar were they were stranded due to rising water levels.