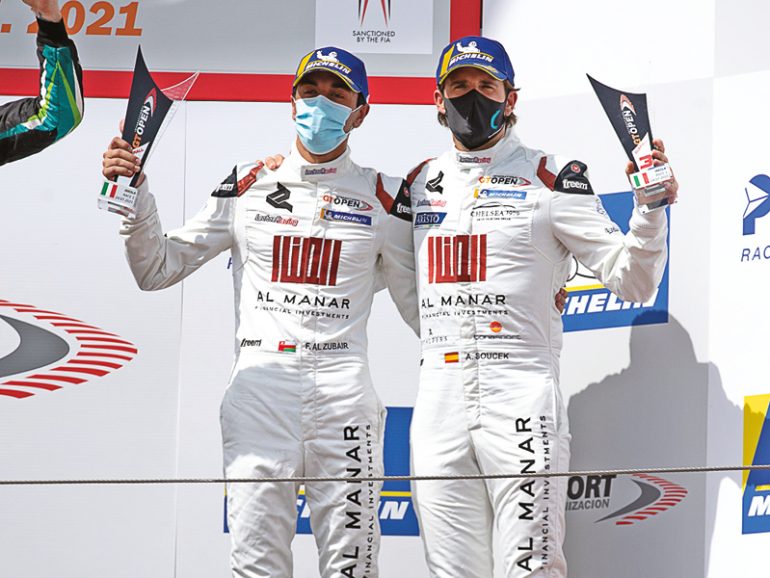 Having missed the third round at Hungary, Oman’s Al Faisal al Zubair returned to action with his Lechner Racing teammate Andy Soucek, in the fourth round of the International GT Open Series endurance racing at the Imola Grand Prix circuit in Italy.

The Omani-Spanish duo maintained their impressive start to the championship season with a hard-earned third place in the first of two races on Saturday afternoon.

The pair qualified the Lechner Racing Team’s Porsche 911 GT3 R in fourth for the 70-minute race and managed to pass the Audi Sport Italia R8 of Lorenzo Ferrari and Riccardo Agostini to claim third place and add to their championship points’ tally.

Race victory fell to Loris Spinelli’s Mercedes AMG from pole position, with Michele Beretta and Frederik Schandorff finishing second in the Vincenzo Sospiri Racing Lamborghini, 4.407 seconds behind the Italian after 41 laps of racing.

Al Faisal said, “Andy qualified the car today in fourth place, which was a decent result, considering the balance of performance of the Mercedes seems a little unfair. Going into the race, Andy started and managed to get into third place and this is where we finished. This was a great result. It was another podium in the championship that we should be really happy about.

“The car feels good, the balance and the set-up are good. Hopefully we can have a good starting position in the next qualifying session and get another podium or a win.”

Earlier, the duo in Porsche 911 GT3 R finished the first of the two free practice sessions in second place with a best lap of 1min 42.085sec after a 22-lap stint. Al Faisaland Soucek came home in third place in the second practice.

In the first 30-minute qualifying session on Saturday morning, Spinelli claimed pole position with a best lap of 1min 39.511sec.

Soucek ran for ten laps and a best time of 1min 40.105sec put the Lechner Porsche in fourth place on the starting grid.