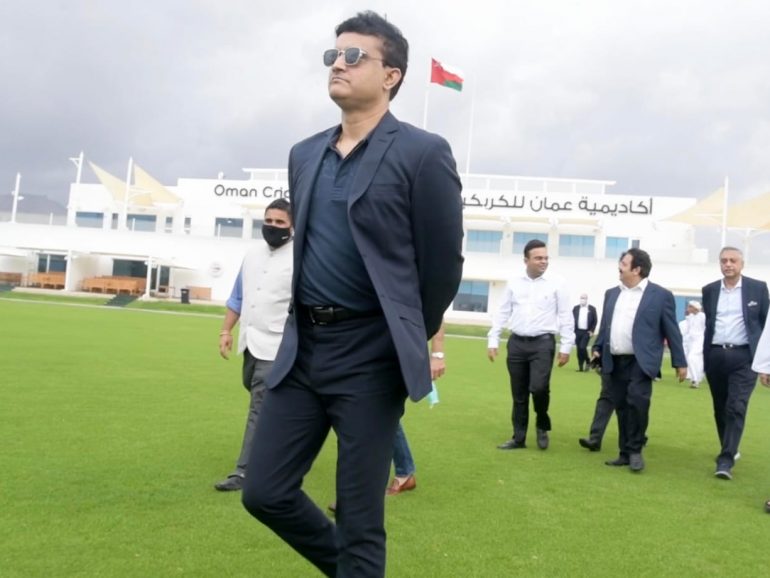 BCCI chief was impressed by the beautiful Oman Cricket Academy ground on Friday after arriving on his maiden and brief visit. “Its a beautiful ground and weather has been very lovely though I know it gets very hot here.  I am impressed by the Cricket facilities the ground has and it is a great step forward for Oman to host and play the T20 World Cup qualifier. “

BCCI president and former India captain Sourav Ganguly at the Oman Cricket Academy ground on Friday where the ICC announced the groupings for the forthcoming ICC Men’s T20 World Cup,  which will be held in Oman and UAE. Oman will host the round one comprising four of the eight teams in the Qualifiers.  Two from both groups of Qualifiers will join the eight teams in the main Super 12s. Oman have been placed with Bangladesh, Papua New Guinea and Scotland.

The International Cricket Council (ICC) today announced the groups for the ICC Men’s T20 World Cup 2021 to be hosted by the BCCI in Oman and the United Arab Emirates from 17 October to 14 November.

The groups, selected on the basis of team rankings as of 20 March 2021, see defending champions the West Indies pooled along with former champions England, Australia and South Africa in Group 1 of the Super 12s, with two qualifiers from Round 1 joining them.

Group 2 will comprise former champions India and Pakistan, New Zealand, Afghanistan and the other two qualifiers from Round 1. Eight teams will contest the first round including automatic qualifiers Sri Lanka and Bangladesh with the remaining six who booked their spot through the ICC Men’s T20 World Cup Qualifier 2019. Ireland, Netherlands and Namibia join Sri Lanka in Group A, whilst Oman, PNG and Scotland will face Bangladesh in Group B.

ICC Acting Chief Executive Geoff Allardice: “We are delighted to announce the groups for the ICC Men’s T20 World Cup 2021. There are some great match ups offered by the groups and it starts to bring the event to life for our fans as our first multi-team event since the onset of the global pandemic draws closer.

“Given the disruption caused by COVID-19, we selected the cutoff date as close as possible to the event to ensure we were able to include the maximum amount of cricket in the rankings which determine the groups. There is no doubt we will witness some highly competitive cricket when the event gets underway in just three months.”

BCCI Secretary Jay Shah: “With the announcement of groupings, our countdown for the ICC T20 World Cup kickstarts. There is nothing that separates the two groups as both are packed with sides that are highly competitive in the shortest format of the game. Having said that, the exciting T20 format is known for its surprises, and we must be prepared for the same. I am sure we will witness some exciting and nail-biting games

“I am particularly delighted to be in Oman. As a major force in world cricket, the BCCI has always endeavoured to promote and assist Associate Nations. In my capacity as Asian Cricket Council President, my vision is to take cricket far and deep into Asia. Co-hosting the World Cup will put Oman Cricket on the global stage. They are also playing the Qualifiers and it will be an icing on the cake if they make it to the Super 12s.”

BCCI President Sourav Ganguly: “It is good to get Oman in the frame of world cricket with the hosting of the ICC Men’s T20 World Cup. It will help a lot of young players take an interest in the game. We know it will be a world class event in this part of the world.”

Oman Cricket Chairman, Pankaj Khimji: “Oman Cricket has come a long way and today is a watershed moment for us to have ICC and BCCI here at Oman Cricket Academy to announce the ICC Men’s T20 World Cup groups!

Playing in and hosting the event gives us an opportunity to showcase not just our commitment to growing the game but also showcasing Oman as a welcoming destination to the world!

“Looking at these groups we anticipate a highly competitive, thoroughly enjoyable spectacle of international cricket. This is truly an aspirational tournament and one the wider UAE Cricket team is extremely excited to be involved in.”

The venues for the ICC Men’s T20 World Cup 2021 are Dubai International Stadium, the Sheikh Zayed Stadium in Abu Dhabi, the Sharjah Stadium, and the Oman Cricket Academy Ground.”

The tournament schedule will be announced in due course.

Group 1: England, Australia, South Africa, West Indies, A1 and B2.
Group 2: India, Pakistan, New Zealand, Afghanistan, A2 and B1.