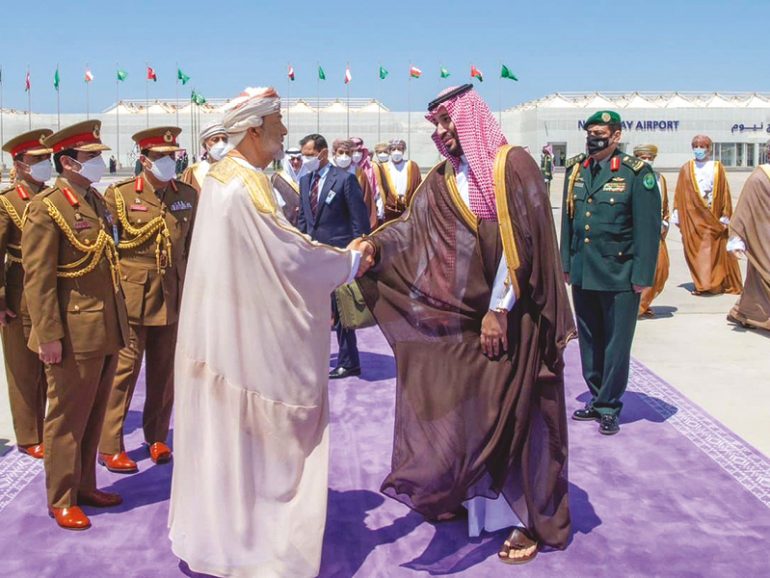 A joint statement issued by Oman and Saudi Arabia appreciated the landmark visit of His Majesty Sultan Haitham bin Tarik to the kingdom which has paved the way for fruitful bilateral agreements and development of both the countries’ economies.

His Majesty the Sultan and the Custodian of the Two Holy Mosques King Salman bin Abdulaziz al Saud held a session of talks on Sunday in the presence of Prince Mohammed bin Salman bin Abdulaziz al Saud, Crown Prince, Deputy Prime Minister and Minister of Defence, when they reviewed ways to develop cooperation between the two countries in various fields. They praised the current level of cooperation and coordination in political, military and security sectors that will facilitate security and stability of the two brotherly countries.

The two sides welcomed the signing of a memorandum of understanding on the establishment of an Omani-Saudi Coordination Council co-chaired by the foreign ministers of both countries to strengthen bilateral relations in all fields. They also agreed to direct the concerned bodies to expedite the opening of a direct land route and border crossing, which will contribute to the smooth movement of citizens of the two countries and integration of supply chains as a prelude to achieving economic integration between the two brotherly countries.

They welcomed the fruitful interaction between the ministers of the two countries to discuss issues of mutual interest. They also directed the concerned officials to work on finalising a number of agreements and memoranda of understanding for cooperation in economic, commercial, investment, security, cultural, diplomatic and educational fields and in every aspect that will enhance benefits and common interests to bring about prosperity and growth to the peoples of the two countries.

The two sides emphasised their intention to increase the pace of economic cooperation between the two countries by encouraging government and private sectors to realise meaningful commercial and investment exchanges. Such cooperation will help realise the aspirations and expectations of the peoples of the two countries and contribute to achieving the targets of the Saudi Arabia’s Vision 2030 and the sultanate’s Vision 2040. This can be done through the launch of a number of joint initiatives covering key fields of cooperation, including investment in the Duqm and cooperation in the fields of energy, culture, sports and tourism in addition to partnership in food security.

The two sides agreed to strengthen cooperation in the fields of environment, food security and the Middle East Green Initiative unveiled by Prince Mohammed bin Salman in the light of the benefit at local, regional and global levels.

The two sides lauded the efforts of the OPEC + countries, led by Saudi Arabia and with the participation of Oman, which have brought about stability and balance to oil markets, despite the weak demand resulting from the successive waves of the coronavirus pandemic, which is still affecting a large part of the world. They stressed the necessity to continue cooperation to support oil market stability.

They also welcomed strengthening cooperation to adopt the Circular Carbon Economy approach as approved by G20 as an integrated and comprehensive framework to address and manage the challenges arising from greenhouse gas emissions.  This will be achieved in an economically sustainable way to manage emissions through the application of reduction, reuse, recycle and elimination. The two sides noted the importance of the use of renewable energy sources and technologies as these contribute to sustaining global energy supplies.

The two sides also welcomed the participation of Saudi companies in investing in quality projects in the sultanate.

Support for regional security and stability

The two sides also exchanged views on regional and international issues of mutual interest and agreed to coordinate their positions in a way that would serve their interests and support security and stability in the region and the entire world.

Regarding Yemen, the two sides expressed an identical view on the need to continue their efforts to find a comprehensive political settlement to the Yemeni crisis based on a Gulf Cooperation Council initiative and its executive mechanism, the outcome of Yemen’s Comprehensive National Dialogue Conference, the United Nations Security Council Resolution 2216, as well as the Saudi initiative to end the Yemeni crisis and alleviate the suffering of the brotherly people of Yemeni.

They also stressed the importance of cooperation and dealing effectively with all aspects and repercussions of the Iranian nuclear and ballistic missile file in such a way that will contribute to achieving regional and international security and stability. They also emphasised the principle of good neighbourliness, respect for the resolutions of the United Nations, and international legitimacy to spare the region from all that may destabilise security.

At the end of the visit, His Majesty the Sultan expressed his deep gratitude to his brother King Salman and to Prince Mohammed bin Salman for the warm reception and generous hospitality accorded to His Majesty and the accompanying delegation.

His Majesty Sultan extended an invitation to King Salman to visit Oman. On his part, King Salman welcomed and expressed his appreciation for the invitation.

He also expressed his best wishes to His Majesty the Sultan and wished further progress and prosperity to the brotherly Omani people.