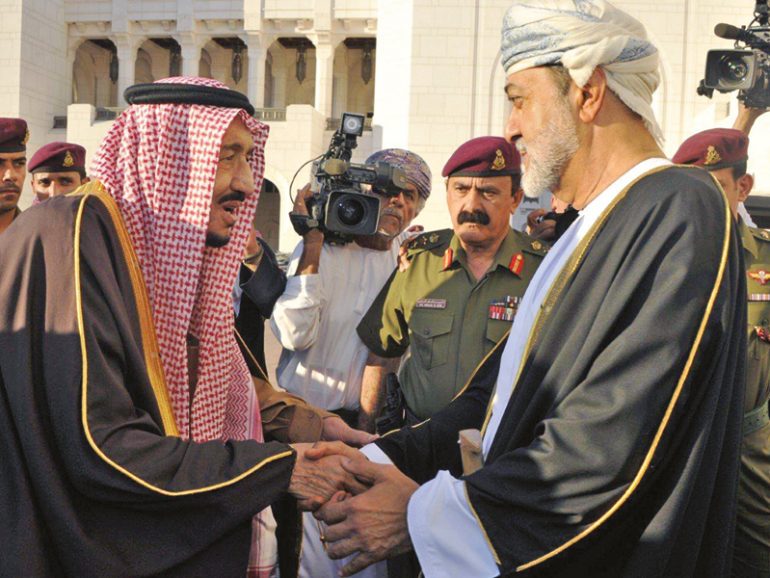 In affirmation of the depth of historical relations between the sultanate and the Kingdom of Saudi Arabia (KSA) and, based on the keenness of the two countries’ leaderships to enhance joint ties, His Majesty Sultan Haitham bin Tarik will head to  Saudi Arabia on an official visit on Sunday. The visit is in response to an invitation from the Custodian of the Two Holy Mosques King Salman bin Abdulaziz al Saud of KSA.

With the visit, Oman-Saudi relations are set to scale new heights, ushering in a new era of wider prosperity and expanded cooperation.

The two countries are bound by deep-rooted ties, which will be consolidated further by His Majesty the Sultan’s historic visit, his first official visit abroad since he assumed power on January 11, 2020.

This will be His Majesty the Sultan’s second meeting with King Salman, the first being in January 2020 in Muscat when the Saudi king arrived in Oman to offer his condolences on the death of the His Majesty Sultan Qaboos bin Said.

Since the day of his accession to the throne, His Majesty Sultan Haitham has affirmed his determination to work in close coordination with his brethren, leaders of the Gulf Cooperation Council states, to upgrade the GCC’s march to realise the peoples’ aspirations.

Oman-Saudi relations are established on solid and enduring principles, which is reflected in the tangible progress made between the two countries in political, economic, social, cultural and security spheres.

The visit is evidence of these relations being continuous, open and expected to see further comprehensive growth.

The two countries’ keenness on exchanging views on matters of common concern is reflected in high-level meetings between the leaders and top officials, and evinced in the continuous contacts between His Majesty Sultan Haitham and King Salam.

Omani and Saudi visions are identical in many ways, including their stand in the field of environment, which is considered one of the most significant international issues raised in the agenda of UN organisations.

Oman expressed its appreciation of Saudi Arabia’s ‘Green Middle East’ initiative to safeguard sustainability of the environment. The initiative, announced by the Crown Prince of Saudi Arabia in partnership with the region’s countries, envisages the implementation of the greatest afforestation programme aimed to address environmental challenges.

His Majesty the Sultan expressed the sultanate’s support to the kingdom’s environment conservation efforts during a telephonic conversation in March with Prince Mohammed bin Salman al Saud, Crown Prince, Deputy Prime Minister and Minister of Defence of Saudi Arabia.

Over a period of two years (2020 and 2021), the sultanate and Saudi Arabia intensified high-level bilateral meetings. In March 2020, His Majesty Sultan Haitham received Prince Khalid bin Salman al Saud, Saudi Deputy Minister of Defence, who was on a visit to Oman.

Prince Khalid bin Salman visited the sultanate to explore aspects of existing cooperation between the two countries and ways to realise the joint interests of Omani and Saudi peoples.

During the meeting, Prince Khalid bin Salman conveyed a message from the Saudi leadership to His Majesty Sultan Haitham. He pointed out that during the meeting emphasis was laid on “enhancing the brotherly, bilateral and strategic relations between the two countries in all fields”.

Omani-Saudi diplomacy converges on many visions, notably combating terrorism and safeguarding international peace and security. This prompted the sultanate to join the Anti-Terrorism Alliance of Muslim Countries in 2016 and to support the efforts of Saudi Arabia in this respect.

Meanwhile, Saudi Arabia has expressed its appreciation for the sultanate’s efforts and its ‘positive role’ in supporting the efforts of UN Envoy to Yemen Martin Griffith and US Special Envoy to Yemen Timothy Lenderking. This was acknowledged by Saudi Foreign Minister Prince Faisal bin Farhan bin Abdullah at a press conference he held in Riyadh in March 2021.

The remarkable growth and expansion in Omani-Saudi relations is in pursuance of a benign march led by the Late His Majesty Sultan Qaboos bin Said and his brethren, the kings of Saudi Arabia, over the past decades. It is a march based on solid foundations and clear-cut principles that distinguish the ties of the two countries. These relations resulted in agreements and joint ventures in several  fields.

The positive interactions between Oman and Saudi Arabia at many levels are conspicuous. They underscore the keenness of His Majesty Sultan Haitham and King Salman to press ahead with promoting this deep-rooted relationship.

His Majesty’s visit to Saudi Arabia and his meeting with King Salman will give impetus to the bilateral relations and constitute a new starting to establish a more prosperous future for the peoples of the two countries. It will lend support to concepts of justice, peace, security and tolerance in regional and international issues of common concern. The visit will also cement intra-GCC ties and rally efforts of the council’s leaders to consolidate stability and prosperity.

The future of Omani-Saudi relations is secure in the hands of their two wise leaders, His Majesty Sultan Haitham and King Salman. This visit will open up wide vistas of cooperation in the fields of business, investment, ICT, post, transport, standardisation, media, youths, sports, culture and other spheres.

These areas constitute significant pillars in Oman Vision 2040 and Saudi Vision 2030 and expected to bring a wide range of benefits to the peoples of the two countries.

The talks of the two leaders will also contribute to resolving pending issues and shaping joint visions and consensus on current regional issues. They will draw on the great political expertise of the two countries and their diplomatic traditions founded on solid grounds of sound foreign policy, coupled with an earnest quest for establishing peace, security and stability in the region and the world at large.