Each one, help one 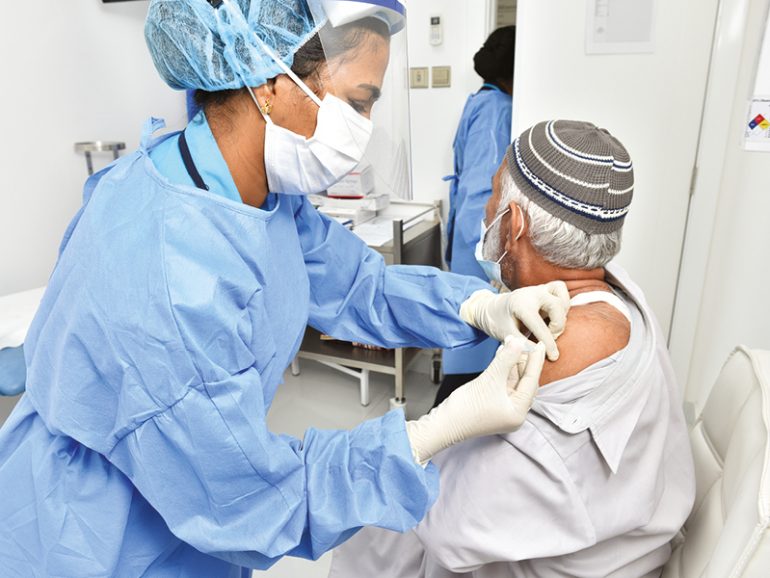 With a large number of low-income and undocumented expatriates being left out of the National Immunisation Campaign against COVID-19, many socially concerned groups and individuals have come forward to support and sponsor free vaccines.

As per National Centre for Statistics and Information data, there were 1.389mn expatriates working in the private and household sector in Oman for May 2021.

Despite an ongoing vaccination drive for the 45+ age group that started on June 20, and 18 years and older being added to the target group starting today, a sizeable number of expatriate workers has been left out of the free National Immunisation Campaign.

Additionally, there are thousands of undocumented workers who are in desperate need of help. With low wages and staying in poor living conditions – some sharing a small room with eight-ten others – these individuals can’t afford to pay for vaccines.

“A classmate who was working in Muscat absconded from his company following some differences. When he got infected with COVID-19, fearing arrest and expenses, he did not go to a hospital and died alone in his room,” said Shaandar Bukhari, a resident eager to help those in need.

A few days ago, the injustice of the situation became even more evident when Bukhari learnt from an employee of a cleaning company that he was told to bear half of the vaccination cost. “This comes at a time when he’s struggling to make ends meet owing to delayed salary, and so he decided not to spend money to vaccinate himself,” Bukhari said.

Moved by the situation, Bukhari decided to support those in need by bearing the cost of vaccination. He has funds for six and so far registered four needy individuals for vaccination.

‘We can make a difference’

On her Facebook page – What’s Happening, Oman? – Jo James wrote,  “Let’s give everyone a chance to get vaccinated,” with a link to a Muscat Daily article titled ‘Low-income workers desperate for vaccines, rue the high cost’, published on June 21.

“Like everybody else, we want everyone to get vaccinated regardless of their income and their residency status. But obviously, not everyone can afford it. Members of our Facebook page are supporting whoever is not in a position to pay,” Jo told Muscat Daily.

Jo and members of the Facebook group had supported low-wage earners with food provisions during the first wave of the pandemic. “Thanks to that experience, we know our target group and area that needs support.”

Last week, Jo registered six individuals for vaccination; she has funds for 30 more. “If we can support around 100 people, that would be great. The more the better.”

However, Jo’s appeal isn’t limited to monetary support, “but showing solidarity with the have-nots, too. We have to do what we can and stand with the underprivileged. If everybody does what they can, then we can make a difference”.

Another resident (named withheld on request) who is socially active said, “Before the pandemic, I used to distribute drinks and snacks among construction workers in summers. Last year during Eid, my colleagues and I pooled some funds and distributed food provisions among people who were hit financially due to lockdowns.”

Following the article dated June 21, she called the Muscat Daily office expressing her intent to sponsor vaccines for needy people.

‘I received mine free and am very grateful’

When Bosky Dutia, who runs the Facebook page ‘Oman Restaurant Review’, wrote, “Would you sponsor a person to get a vaccine if they can’t afford it?” members messaged their support.

Catherine Baker commented, “Happy to contribute as I received mine free and am very grateful.”

Another member Vamsi Krishna Kolachala wrote, “I am also happy to contribute. Please share details. I would like to contribute for one.”

Bosky understands the government is doing what it can to immunise the population but doesn’t know the challenges it faces in acquiring vaccines. “We should help the government in expediting the vaccination drive. If even one person helps another, this problem will be solved.”

Within four days of her Facebook post, 24 individuals were vaccinated with help from member, while others pledged support. She has a list of 200 needy individuals which is growing every passing day. “I will be able to vaccinate ten more people with the support I already have. I don’t know what after that.”

Having being affected closely by the pandemic after her parents and sister were infected, and losing her brother-in-law, an uncle and an aunt to the virus, Bosky just wants to help.

“It is a very personal thing. I want to help somehow and get over it, get through it. One doesn’t need to help thousands of people. You just need to help one fellow human being.”