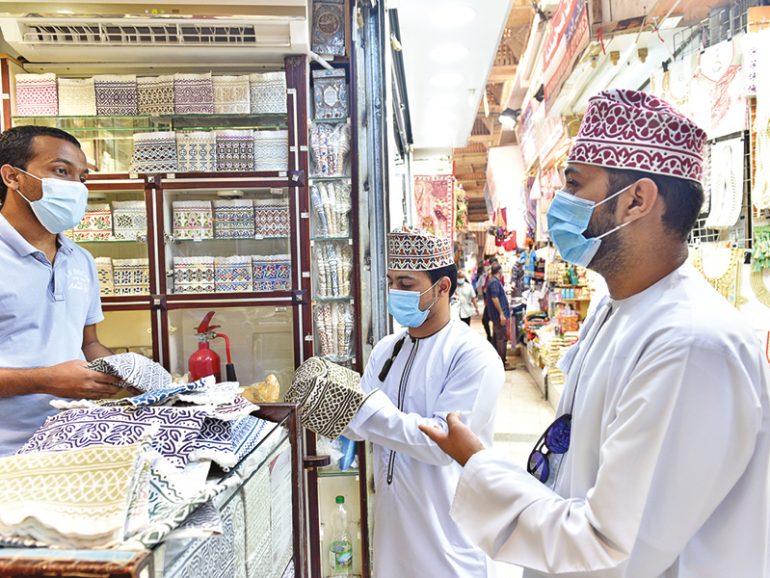 The Ministry of Commerce, Industry and Investment Promotions (MoCIIP) has called on the owners of shops selling and stitching men’s and women’s dresses not to distort traditional Omani dresses and costumes such as kummah, musar or turban, in any way ‘contrary to the public interest’.

The ministry through a statement alerted that the traditional men’s dress (dishdasha) and women’s abayas must not be distorted “either by sewing or printing slogans and trademarks of foreign clubs or by making drawings contrary to the public interest, or by merging designs of musar and the Omani cap or other traditional dresses in any form that may distort these traditional Omani costumes”.

The Directorate of Commercial Affairs and Electronic Commerce at the MoCIIP emphasised that the Omani dress is an important symbol of the traditional Omani heritage.

While the ministry had already warned all commercial institutions and companies in its previous announcements against any abuses that offend some traditional Omani clothes and costumes.

The MoCIIP pointed out that this notice was issued after it had been found that some commercial establishments were violating the ministerial decision (No. 270/2015), which banned the import of some products, while some of these establishments were found importing and selling items which are offensive to the Omani dress identity and costumes. Some establishments were also found selling products which had images and slogans considered offensive or against the common moral practices, costumes, and the public order of Oman.

The MoCIIP is continuing inspection drive in sewing shops in various governorates of the sultanate to stop this practice.

For the purpose, it has deployed a team of inspectors which work under directorates and departments in various governorates of the country.

It has urged all to abide by the rules and regulations as well as protect the Omani costumes in its original form and not to purchase or market products that are in violation of this decision.

In the context of the ministry’s keenness to protect Omani dresses against distortion and to preserve the Omani identity, the MoCIIP has cooperated with the relevant authorities to issue an Omani standard specification for the Omani dishdasha.