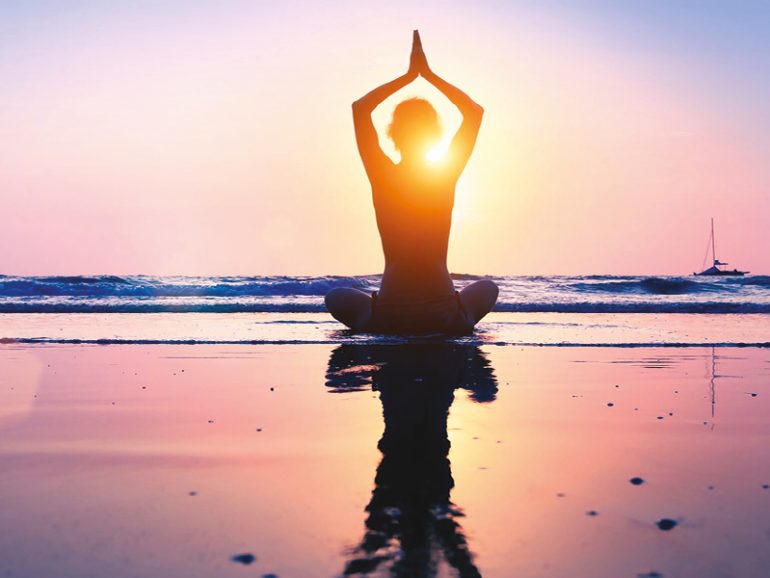 Today, the 7th International Yoga Day will be observed all over the world under the theme ‘Yoga for Wellness’ in view of the current unrelenting COVID-19 pandemic. This fitness discipline which originated in India over 5000 years ago was developed as a way to achieve harmony and balance between the heart and soul, and to achieve divine enlightenment. Subseqently, the practice of yoga was seen to have a host of medical benefits.  On this occasion, Kavitha Ramakrishna, an avid yoga practitioner in Oman, spells out the efficacy of yoga as ‘a skillful science of gaining mastery over the mind’.

Yoga is becoming popular in all parts of the world. For the restless mind, it offers solace. For the sick, it is a boon. Yoga helps to develop memory, intelligence, and creativity. With its multi-fold advantages, it is also becoming a part of education.

Specialists use yoga to unfold deeper layers of consciousness in their move towards perfection. The promotion of positive health is being nurtured by many who do not want to be the victims of modern ailments. Hence, yoga plays a vital role in this aspect in the new millennium. It transforms a narrow-minded, egoistic personality into an all-pervasive person with a blissful state of reality.

Yoga is a systematic, conscious effort towards the self-development of potentialities. It emphasises all-round personality development at the physical, mental, intellectual, emotional, and spiritual levels. It is a process by which limitations and imperfections can be washed away, resulting in a superhuman race. Thus, Yoga is a systematic process for accelerating the growth of a human being in its entirety.

The key to this all-round personality development and growth is culturing of the mind. This yogic technique of ‘mind control’ is prescribed by Patanjali wherein it is considered a skillful trick to calm down the mind. Knowledge is the key. Similarly, in mind control, yoga provides the necessary techniques to operate at the right place at the right time to gain complete mastery of the mind.

This is the month of International Yoga Day. It has been celebrated annually on June 21 since 2015 as it is the longest day of the northern hemisphere and shares a special significance in many parts of the world. International Day of Yoga was first proposed by Indian Prime Minister Narendra Modi and a total of 177 nations had co-sponsored the resolution.

This year, the virtual celebrations for 100 days have started from 14th March 2021. Eighteen prestigious yoga institutions have made a syllabus for 35 minutes; so, they are planning to have 300mn participants for this year’s celebrations. As a yoga practitioner, I am trying to spread awareness to my Omani brothers and sisters by showcasing the importance of yoga – the science of life.

Correction of breathing patterns is the most effective way to harness the energies for systematic development of the physique and psyche. The respiratory system is the bridge between the conscious and the subconscious, the voluntary and the involuntary, or in general, the body and mind. So, I am trying to teach the ‘king of asanas’ – the Sun salutation and breathing techniques which work on the physiology of the body, the endocrine system, respiratory system, all the chakras, and finally for the health of our body and emotions.

Yoga is a skillful science of gaining mastery over the mind. It is also described as the power of all creative endeavors and creation itself. When your mind remains steadfast and unperturbed, even on hearing confusing and conflicting statements, then you would have attained the state of yoga. So, by practicing yoga, one can achieve a state of excellent steadiness at an emotional level, a balance of concentration, detachment at the mental level, and homeostasis at the body level.