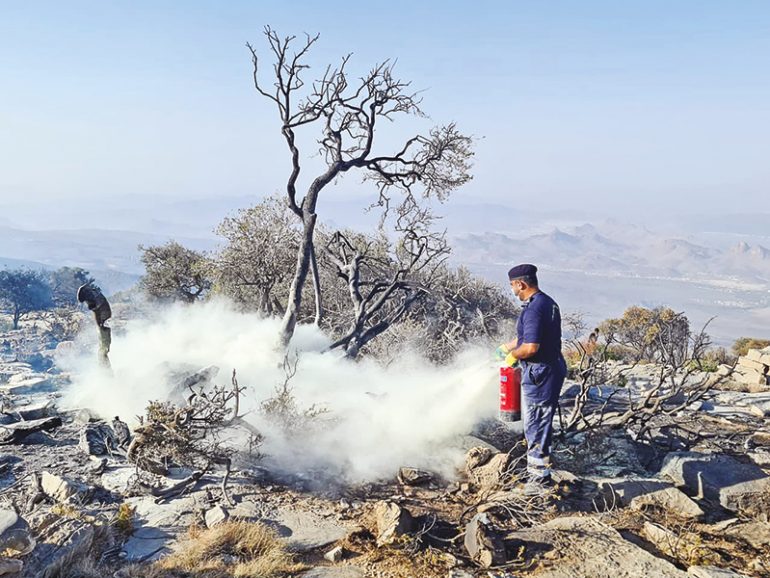 Tireless efforts made over three days by the Civil Defence and Ambulance Authority (CDAA) – in cooperation with the Police Aviation, the Royal Air Force of Oman and other teams from the Royal Oman Police – successfully put out a wildfire that broke out in Ras al Harq area of the wilayat of Al Hamra in Dakhliyah governorate on June 16.

The CDAA announced the end of the field operations on Saturday afternoon after a joint team of 250 personnel completely doused the fire that charred many trees and bushes spread over a large area.

“More than 250 personnel from different units were transported through five aircraft belonging to the Police Aviation and the Royal Air Force of Oman to douse the wildfire,” a CDAA official told Muscat Daily, giving the details of the operations.

“The authority used the Police Aviation and the Royal Air Force of Oman aircraft to contain the fire as CDAA helicopters were unable to carry out operations because of the rugged mountainous terrain and the lack of water sources. The fire lasted for three days but did not affect any residential area as it was about 5km away from any habitat,” he said.

“The fire started at the top of the mountain and winds helped spread it over a large area,” he said, adding that “a committee is looking into the cause of the fire.”

Ahmed bin Salem al Naabi, a legal researcher at the Environment Department in Dakhliyah, said, “The fire caused great losses, affecting the wildlife and wild trees in that region. The area has many wild trees such as Al Aalan or juniper trees.”

“We urge tourists and visitors to natural sites to put out grill fires after camping, because drought, heat and wind help speed up any fire, even if it is small,” said the CDAA official.

The Environment Authority on Saturday said it would coordinate with the competent authorities to send experts to survey the area and the damage caused by the fires to wildlife, especially the vegetation cover that characterises the area. ‘Causes of the fire and its spread will be studied, as well as to develop the necessary plan to rehabilitate the site at the earliest.’

‘These shocking images of wildfires should remind us all about the fragility of our mountain ecosystems,’ the Environment Society of Oman said.

‘These mountains are home to juniper trees which, for many reasons, face limited regeneration. When visiting the mountains please ensure that you leave no trace behind.’