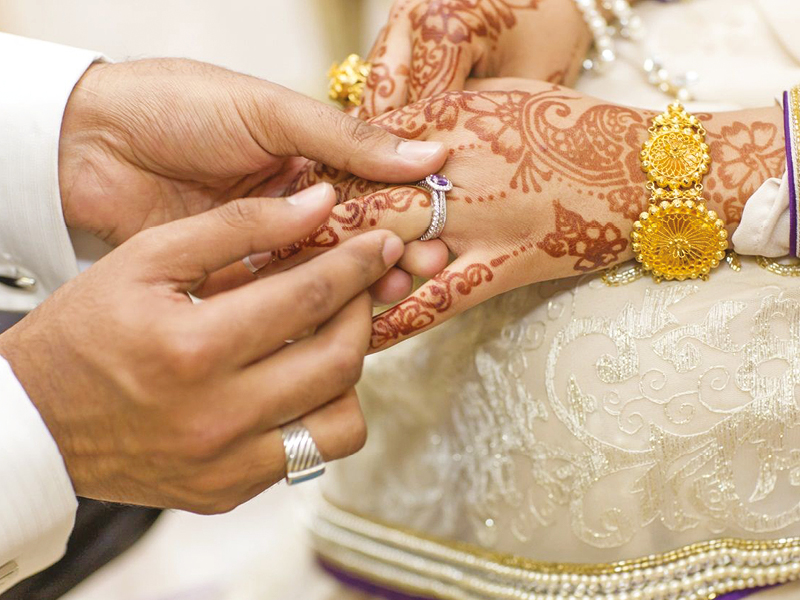 With the ban on holding wedding functions due to COVID-19 pandemic being lifted, youths in Oman are once again getting ready to shell out more to tie the knot. In previous months the weddings were low-cost and low-key affairs.

In observance of health precautions, including a ban on gatherings and closure of wedding halls previously, many young men were happy to go for small-scale parties.

Masoud Nizar from Al Khuwayr who got married two months ago when wedding functions were still out of bounds, said, “COVID-19, which may not be a good thing, brought some good news because wedding expenses were less when I got married. Both my and my wife’s families agreed to hold a very simple ceremony without inviting people. It saved me a lot of money.”

He said that he had planned a big wedding next year but brought forward it for two reasons – not being sure when the pandemic would end and to take advantage of getting married with less expenses without a wedding function.

“By doing so, I saved at least RO3,000. I had saved some RO5,000 for my big day because both my parents and her parents wanted to have a party but now it is in my account; I will use it to do other important things.”

Another recently engaged Omani youth Anwar Jamal from Amerat was hoping to have a small ceremony at home. The announcement to lift the ban of weddings came as a surprise to him.

“I had not planned for a big wedding but my wife-to-be wants to have a ceremony in one of the halls. Given that we are now allowed to host up to 300 people, this means I have to shell out at least RO3,000 more on my wedding,” he said.

Before the COVID-19 outbreak, weddings in Oman would be conducted in the presence of a large crowd of relatives and friends. However, under the current circumstances, the number of those attending is limited.

According to those who got married before the COVID-19 pandemic, such weddings cost them big amounts.

“Weddings used to cost up to RO10,000. Men used to hold marriages in the halls of mosques attended by a large number of family members, friends and neighbours without limit, but now the attendance is limited to only family members. And for women, wedding halls in hotels were a norm which cost a lot of money. I remember my wedding three years ago cost me around RO10,000,” Mohammed al Balushi from Sohar, said.

While wedding halls and other large-scale facilities were allowed to reopen by the Supreme Committee, after being required to close since the start of the pandemic, they can only operate at 30 per cent capacity, or accommodate up to 300 people, whichever is lesser.