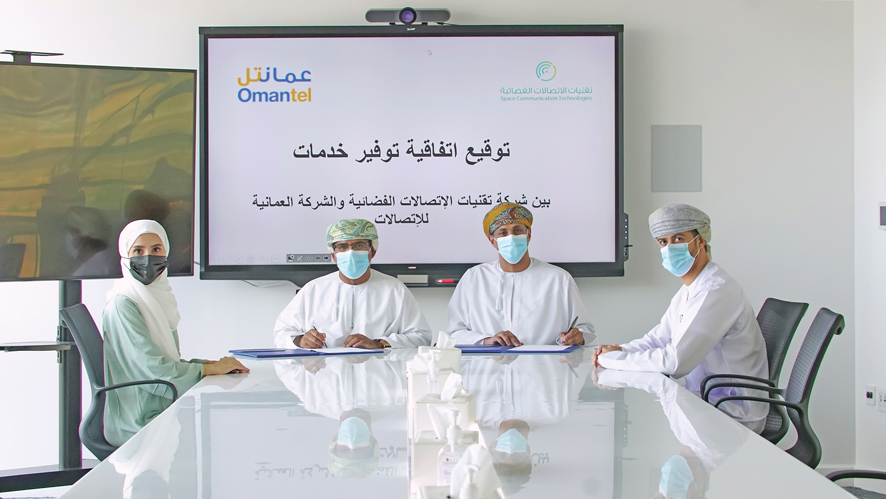 Space Communication Technologies Company (SCT) and Omantel have signed an agreement to provide satellite communication to the different verticals in the Omani market. Omantel will utilize the satellite services using the state-ofthe- art technologies on Ka-Band from the SCT’s satellite Earth Station located in Omantel’s Al Amerat teleport on the Omani satellite payload on Arabsat6A @ 30.5 E.

Omantel will use this service to expand and enhance its reach for mobile network backhauling, in addition to providing connectivity services to their end-customers in different regions across the sultanate, according to a press statement.

As the leading integrated telecom services provider of Oman, Omantel sees this agreement as a push towards digitization that is modernizing traditional ways of governance, education, business, services and administration by offering more efficient technologies and advanced solutions.

The agreement will further consolidate Omantel’s position as the market leader as the company will expand and enhance its reach for mobile network backhauling. Omantel will gain satellite bandwidth to complement its terrestrial range coverage, thus expanding the user-base, and bringing them access to the latest innovations through improved connectivity.

This agreement is another collaboration between Omantel and SCT. In 2020, Omantel was selected as SCT’s telecom infrastructure service provider and accordingly SCT co-located its main satellite hub in Omantel’s teleport in Al Amerat.

Eng Salim al Alawi, executive director of SCT, said, “Signing the agreement with Omantel is an extension of collaboration between the two companies in the field of space telecommunication. Omantel is considered as one of the biggest strategic partners to SCT. As the agreement states, Omantel will be provided with satellite bandwidth for its commercial users to complement their services provided by terrestrial coverage. This will provide Omantel with satellite connectivity to increase the bandwidth available to the mobile stations in the rural areas.”

Eng Salim al Mazrui, general manager – wholesale operations at Omantel said, “Through this partnership with SCT, we will be able to increase the backhauling capacity for various mobile stations located in remote areas. By doing so, we will be able to upgrade the mobile technologies offered in these areas, which in turn, will allow our clients to enjoy enhanced services and better customer experience, which is one of our key priorities. We thank our counterparts in SCT for their efforts in facilitating this agreement.”

Omantel and SCT are in the process of deploying the project to reap the mutual benefits in the near future.

Space Communication Technologies LLC was established by the government of Oman with a mission of spearheading the National Satellite Program initiative by building national satellite communications infrastructure and developing required capabilities to serve public and private sectors, coping with their immediate long-term telecommunication needs.