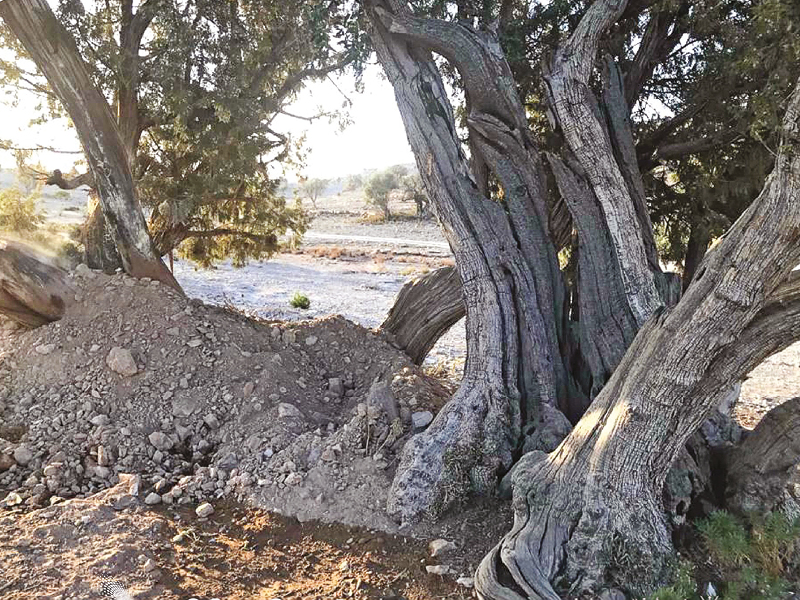 The repeated burning of rare trees in Jebel Akhdar has evoked a strong reaction among people on social media.

On Sunday, the Environment Authority followed up on a report that an Al Alalan tree was torched in the Khub Hail Mahlab area, adjacent to the Riadh al Jabal Farm affiliated to the Royal Court Affairs in Jebel Akhdar. Specialists from the farm put out the fire.

The authority confirmed that these mishaps happen when individuals and tourists lit fire for cooking near these trees.

‘These trees quickly catch fire even by the remnants of cooking and grilling fires,’ it said.

Said al Busaidi, who posted the video of the burning tree on Twitter, said, “Al Alalan tree is one of the endangered tree species, according to Oman Animal and Plant Genetic Resources Centre. Unfortunately, we are still witnessing irresponsible behaviour against this tree in Jebel Akhdar. I hope the authorities will find these vandals and punish them.”

Ahmed al Saqri, another Twitterati, said, “I would like to thank all the officials of the Environment Authority, but I hope to put solutions on the ground to achieve the national goal, such as appointing reserve supervisors with the existing staff there, setting up guiding, awareness and educational regulations on the importance of these trees and identifying places for camping, grilling and cooking.”

Muneer al Riyam said, “It doesn’t take much effort as long as those persons are given permission to fine the violators. Park rangers need to monitor camping to ensure they leave no trace behind.”

“I was in the mountain a few days ago and noticed that there were no specific areas for camping. Every visitor pitches a tent and this undoubtedly affects the environment and the perennial plants. I would like authorities to identify specific places for camping with monitors to ensure that people maintain the cleanliness of the place and do not harm the environment. I suggested also putting up fences around the old trees with regulations to guide tourists that these trees are highly flammable,” Abu Hilai, another Twitterati said.

“The burning of wild trees was repeated three times last year in the same area. The Environment Authority is responsible for protecting these trees, and it must take strict measures against violators,” Ali Yahya tweeted.

The Environment Authority on Twitter said, ‘We confirm that these actions are in clear violation of the Environmental Protection and Pollution Control Law, and the act is punishable by imprisonment and a fine in accordance with Article 33 of the law for anyone who causes disruption in the nature conservation areas.’