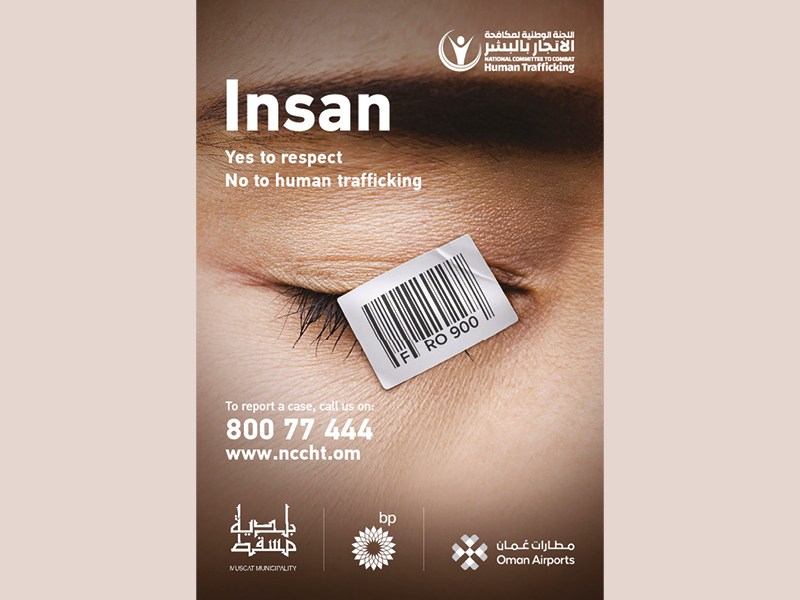 The leading awareness campaign, launched by the National Committee to Combat Human Trafficking on March 1, entitled ‘Insan’, saw its conclusion on May 31.

The campaign was aimed at generating awareness among various segments of society about human trafficking crimes, ways to detect them and how government efforts can be supported to deal with such cases.

Commenting on the conclusion of the campaign, Sayyid Badr bin Hamood al Busaidi, Foreign Minister and chairman of the committee said, “The Sultanate of Oman is a country that respects all human beings. This is the principle that the late Sultan Qaboos bin Said – may the Almighty rest his soul in peace – made clear in his speech at the Annual Session of the Council of Oman in 2003.

“In his speech, he said, ‘We are against injustice and darkness, and on the side of justice, light and harmony. Mankind will only enjoy happiness and a sense of security if there is justice and respect for all those things which guarantee human beings their legitimate rights. First and foremost of these is their right to honour, dignity and freedom from humiliation, and their right to liberty and independence’.

“This is the same principle that His Majesty Sultan Haitham bin Tarik – may the Almighty protect him – reinforced in his speech on February 23, 2020. He said, ‘We are proud that the citizens and residents in our dear country live, thanks to the Almighty, in the purview of the State of Law and institutions, a state built on the principles of freedom, indiscrimination, and equal opportunities, a state established on justice and dignity of individuals whose rights and liberties are secured therein’.

“Therefore, these are the principles of the Omani people, which make them a means of support and strength of the law enforcement forces as it continues its battle against heinous crimes in society.”

Sayyid Badr added, “I would like to extend my sincere thanks and appreciation to all the parties who were a part of the campaign.”

From his side, Nasr bin Khamis al Sawai, Attorney General and deputy chairman of the Committee stated, “The Government of Oman, represented by the National Committee to Combat Human Trafficking, strives tirelessly to combat human trafficking crimes. This is made further possible by reviewing the legislative system and proposing laws for perpetrators of the crime.

“The committee is also keen on tracking the crime index through the statistical systems, providing care and protection to the victims. Furthermore, the committee continues to organise campaigns to educate the different segments of society about human trafficking and various methods of reporting. We are proud of the positive results that have been reflected through the media and advertising campaign, which affirms that the community does not tolerate such crimes.”

Sayyid Ammar bin Abdullah al Busaidi, first secretary of the Ministry of Foreign Affairs and the supervisor of the Human Trafficking Committee, said, “We believe that combating human trafficking is not just the task of a particular entity. Rather, this is a joint effort from everyone involved through a means of collaboration of everyone within society,

working towards this endeavour. The Insan campaign focused on targeting various segments of society through awareness and motivational messages, intending to encourage their participation in combatting human trafficking.

“We are extremely proud of the positive results of the campaign, which showcased the high level of interaction within different segments of society. This way, we were able to detect cases that would have been overseen and not detected, if it were not without the support and awareness of the community, especially concerning extending care to the victims. A few of the campaign’s awareness activities will continue to take place until the end of the year as scheduled.”

Each of them recorded a short video, expressing their support of the Insan campaign that focused on the concept of humanity. They also pointed out the Islamic values and morals that define the Omani character in their communication with others.

The sultanate’s government is constantly working to combat human trafficking crimes by legislating preventive laws for perpetrators, providing care and protection for victims, as well as organising campaigns and workshops.