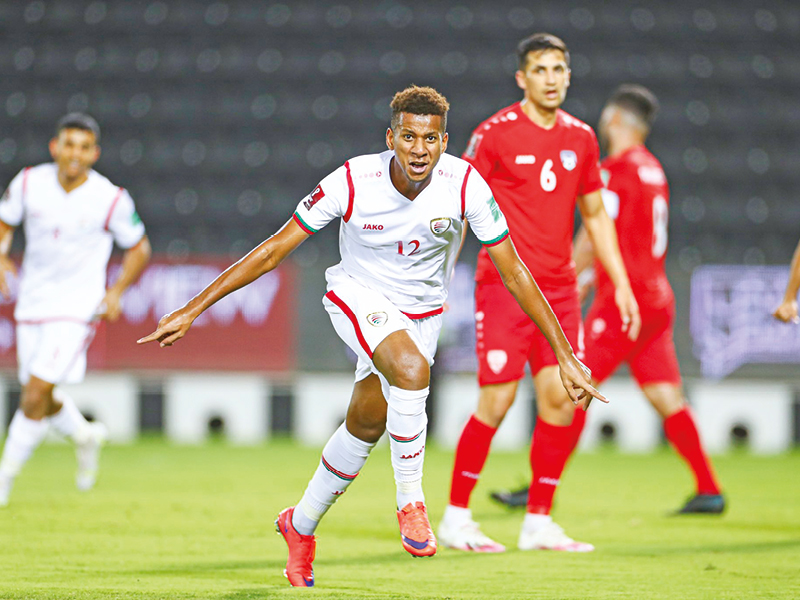 It was young Abdullah Fawaz’s night at the Jassim Bin Hamad Stadium in Doha, Qatar, on Friday as the 24 year old struck a brace in Oman’s crucial 2-1 win over a stubborn Afghanistan.

The laboured victory bolstered Oman’s chances of advancing to the final round of the Asian World Cup qualifiers.

Playing their penultimate game in the Group E second round of the Asian qualifiers for the FIFA World Cup Qatar 2022 and AFC Asian Cup China 2023, Oman staved off a tough challenge from their spirited rivals, thanks to  two stinging long-range shots from Fawaz, one as early as in the 14th minute and the other in the second half.

The opener from the attacking midfielder from Dhofar Club came off an assist from another young midfielder, Salah al Yahyaei. However, ten minutes later, Afghanistan drew parity as they exposed Oman’s defence off a counter move and Omid Popalzay’s powerful shot beat Oman goalie and captain Faiz al Rusheidi.

Oman could have gone into the interval with a lead had Mohsin al Ghassani not missed an opportunity off a pass from Yahyaei and headed into the break level at 1-1.

defenders and the Afghan goalie Ovays Azizi in the 52nd minute.

With Qatar already securing the top-spot in the Group with an unassailable 22 points, Oman now aim to finish among the best five runners-up among the eight groups. A win against Bangladesh in their concluding game at the same venue on Tuesday will tighten their grip on one of the five places available.

“I want to congratulate the players for this important win and the good thing is that we got the three points from this difficult match,” said Ivankovic in his post-match comments.

“The players were aware of the importance of winning the match and I kept reminding them during the match to focus.”

“We dominated the match but expected some difficulty to score against Afghanistan because we knew that they would defend.

“The players deserve this win which has brought joy to all of us and the people back home.

“The pandemic affected us negatively as competitions have been cancelled and we tried our best to prepare the players and hopefully, things can get back to normal soon,” he said.

Australia march into next phase

Australia marched into the third and final phase of Asian qualifying for the 2022 World Cup after a 3-0 win over Nepal saw them comfortably top Group B with a game to spare at the Jaber al Ahmad International Stadium in Kuwait City on Friday.

The Socceroos, overwhelming favourites to win the group, took their tally to 21 points in an unbeaten run of seven matches, leaving Jordan and Kuwait to battle for second place.

Australia became the third team to make the third round after Japan and Syria had sealed their places by topping their respective groups earlier.

Earlier, Iran hammered Cambodia 10-0 to keep their battle with Iraq going in their quest for top spot in Group C at the Bahrain National Stadium in Riffa.

Iran took their tally to 15 at the top, but later Iraq pipped Hong Kong 1-0 to reclaim the group lead with 17 points.

Meanwhile, Saudi Arabia are just one point away from topping Group D after clinching a 3-0 win over Singapore.

Also in Group D, Uzbekistan pipped Yemen 1-0 to keep the pressure on the Saudis.