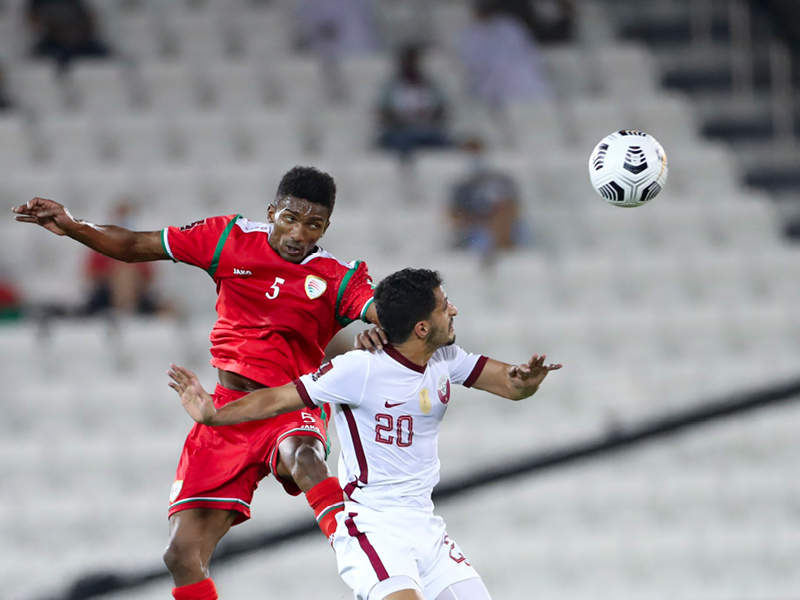 A soft penalty against them, then a goal disallowed, followed by a penalty overlooked. All in 90 minutes as a brave and strong display by the Red Warriors went in vain with Oman left to rue some glaring omissions by the Sri Lankan referee in their 0-1 defeat to the hosts and Asian Cup holders Qatar at the Jassim bin Hamad Stadium in Doha on Monday night.

Poor refereeing decisions from Sri Lanka’s Hettikamkanamge Perera not only destroyed a good game but also left Oman camp and fans fuming, with Twitter exploding with calls for action against the erring official.

It was the first major test for Oman’s Croatian coach Branko Ivankovic since he took over as national team coach in January 2020, and his team selection and tactics displayed lot of enterprise and enthusiasm against a fancied opponent.

Playing the Group E match of joint World Cup and Asian Cup qualifier, the narrow win confirmed Qatar’s top spot in the group and a place in the 2023 Asian Cup finals.

However, the defeat meant that Oman will need to win their remaining games against Afghanistan (June 11) and Bangladesh (June15) to harbour hopes of advancing to the next round as one of the best second-placed finishers.

The only goal that separated the two Gulf rivals came late in the first half when Qatar’s Almoez Ali was harshly adjudged to have been fouled by Abdullah Fawaz inside the box and a penalty awarded, much to the protest of Omani players. Qatar skipper Hasan al Haydos converted the spot kick slamming on the wrong side of a diving Oman captain and goalkeeper Faiz al Rusheidi in the 39th minute.

Four minutes later Oman’s Zahr al Aghbari was brought down on the top of the rival box but the referee overlooked the foul from the Qatari player.

Oman fought back in the second half and threatened the Qatar defence on numerous occasions with a header from substitute striker Khalid al Hajri in the 72nd minute missing the target narrowly.

Oman believed that they equalised in the 90th minute when Hajri shot the ball in after Qatar goalie Saad al Sheeb failed to make a clean save.

However, to the shock and disbelief of all, the referee blew the whistle for an off-side.

Soon after the goal was disallowed, Oman had another chance, and this time Qatar’s Sheeb pulled back Hajri to the ground inside the box while going for a challenge, and Oman’s penalty claim was once again overturned in the dying minutes of the match.The win for Qatar was their seventh in eight games and they concluded their engagements in the group with 22 points while Oman are ten points behind but with two games remaining.

Despite the defeat, Ivankovic praised the performance of his players and felt they were worthy of at least a share of the points.

“Congratulations to Qatar for their win tonight. They have been the best team in Asia in the last few years and they deserve to be on top of the group,” said the Croatian.

“Our players performed well and created many scoring chances but we were not lucky today while the weather also affected them.

“I expect that we can qualify from the group and we hope to win the last two matches. We will give our best in those matches, and hopefully, we can advance as one of the best runners-up.”

The coach said that he was surprised that the ‘goal from [Khalid] Hajri was declared off-side’. “Even we could see he was clearly on-side. Some of the refereeing decisions were harsh on us including a penalty that was disallowed. May be, we weren’t lucky today,” said Ivankovic.

Qatar’s coach Felix Sanchez lauded his side for getting their job done by qualifying for the Asian Cup China 2023 finals.

“Qualifying for the AFC Asian Cup is the latest achievement for Qatari football and it’s a happy day for us,” said Sanchez. “I hope we can continue producing good results with the team.

“The match was difficult against a persistent team who tried their best to equalise. At the end of the day we achieved our target, which was to qualify for the AFC Asian Cup. We will give the players a few days of rest and then resume working for the CONCACAF Gold Cup.”