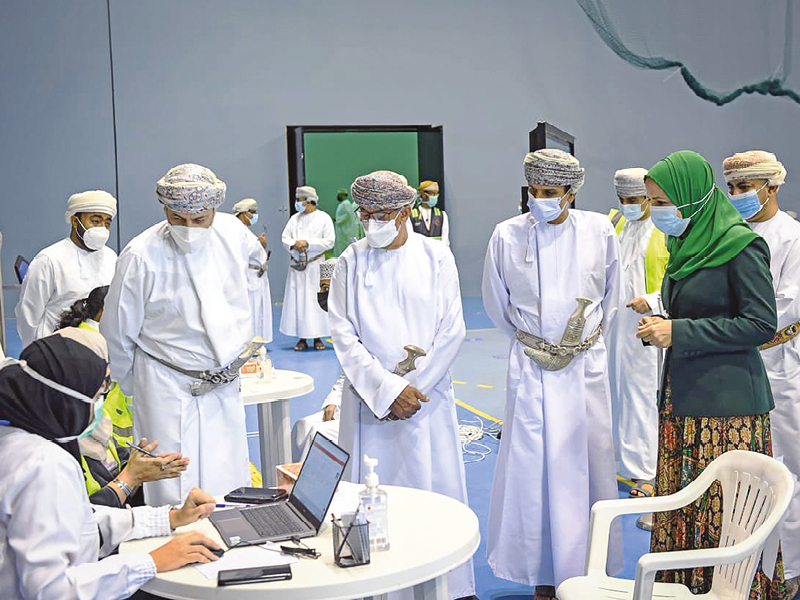 A mass immunisation drive started on Sunday across Oman with most centres seeing heavy rush. Members of the Supreme Committee, which is tasked with tackling developments resulting from the COVDI-19 pandemic, visited the vaccination centre in Sultan Qaboos Sports Complex Bausher set up for Muscat governorate, on Sunday.

The visit was led by H E Sayyid Hamoud bin Faisal al Busaidi, chairman of the Supreme Committee, accompanied by other members to monitor the progress of the immunisation drive.

‘Committee members were briefed on the procedures outlined from the start of registration of target groups to the moment of vaccination.

They were updated about the mechanism of coordination and reception of eligible groups, as well as the precautionary measures undertaken.

They commended the turnout of citizens and residents for the vaccine,’ the Ministry of Health (MoH) said in a statement.

H E Dr Abdullah Nasir al Harrasi, Minister of Information and member of the Supreme Committee, pointed out that the visit aimed to follow up on the implementation of the nation-wide immunisation plan.

“The Supreme Committee urges all target groups to take the vaccine to protect themselves, their families and society from this disease,” said H E Dr Harrasi, stressing that the vaccine is the most efficient way of securing protection. He also underscored the significance of commitment to the measures announced by the authorities concerned, including adherence to social distancing and avoiding gatherings.

“Undoubtedly, many commercial and economic activities around the world have been seriously impacted by measures undertaken by countries for protection against this dangerous disease, and the sultanate is no exception.

“Since the outbreak of the pandemic, Oman has adopted elaborate measures that maintained a balance between public health and business activities. Experts predict that the whole world will shift between closures and opening of business activities till such a time that the vaccine shows positive results in overcoming the disease,” said H E Harrasi.

The minister cautioned against paying heed to rumours about vaccines. “Scientists who are well-versed in epidemiology affirm that what is circulating about vaccines and immunisation is totally baseless and devoid of truth,” he said.

The Ministry of Health (MoH) confirmed 3,177 new cases of COVID-19 in the sultanate from Thursday to Saturday, in addition to 28 related deaths.

The ministry added that 2,459 cases recovered in the three-day period, accounting for a total of 204,480 recoveries.

One hundred and fourteen individuals were hospitalised in a 24-hour period on Sunday, accounting for a total of 937 patients in health institutions, including 290 in intensive care.