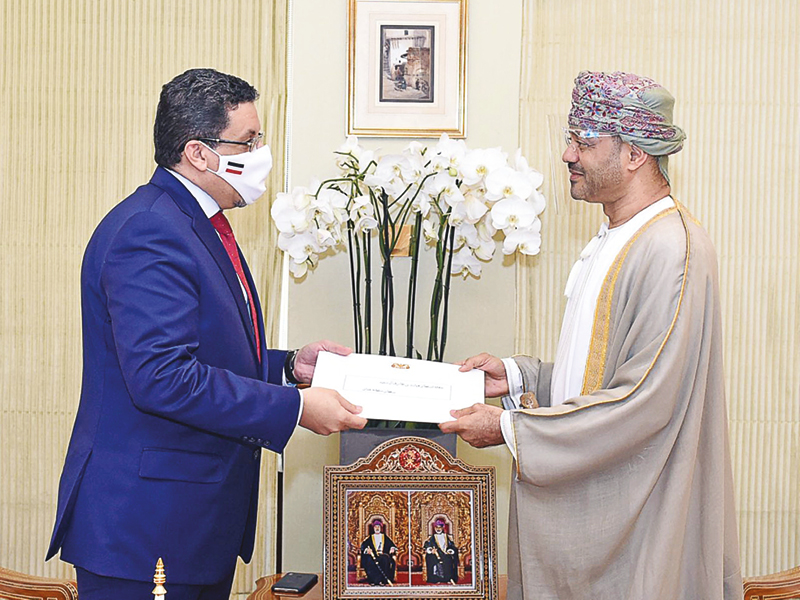 His Majesty Sultan Haitham bin Tarik has received a written message from Field Marshal President Abdrabbuh Mansur Hadi of the Republic of Yemen.

The message deals with the bilateral relations between the two brotherly countries and means of promoting these in all spheres. The message was received by Sayyid Badr Hamad al Busaidi, Foreign Minister, when he received Dr Ahmad Awad Mubarak, Minister of Foreign and Expatriates Affairs of Yemen, on Sunday.

The meeting reviewed developments and the situation in Yemen and the UN efforts to end the war in a way that preserves unity and safety of Yemen.

Following the meeting, Sayyid Badr tweeted, “Yemen and Yemenis have a special place in the hearts of Omanis. Today, I was pleased to meet Dr Ahmad Awad Mubarak and discuss with him the efforts to stop the war in Yemen and bring peace in line with the aspirations of the Yemeni people.”

The two sides reiterated the importance of enhancing cooperation with all parties to achieve security and stability in Yemen by supporting efforts of the UN and US envoys.