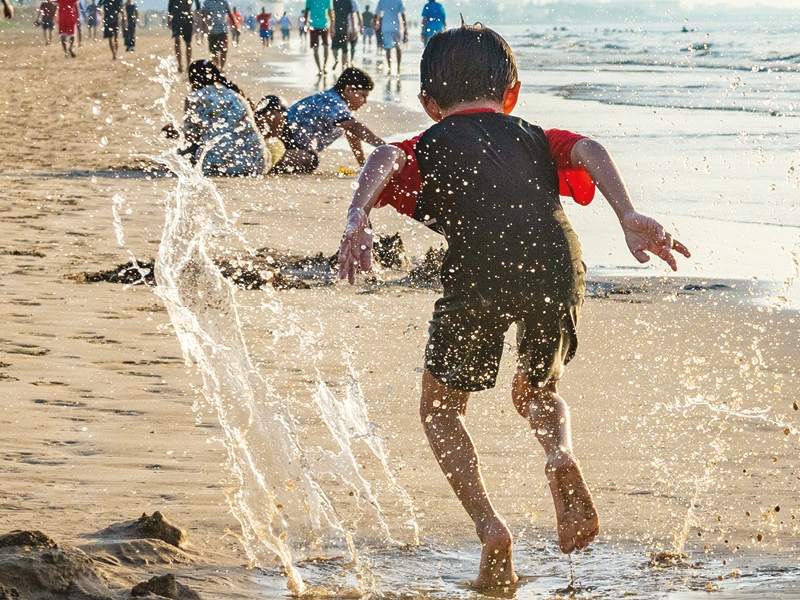 Excitement, laughter and squeals of joy swept across Qurm beach as children of various age erupted in merriment – the magnitude of which could be gauged by the sparkle brightening their eyes.

After months of being locked within the four walls of their homes, this weekend witnessed these youngsters celebrating life as the Supreme Committee declared parks and beaches open for public.

One could see children as young as three years jumping in the water with their parents while others were seen making sand castles. They giggled and ran freely.

Raziq Abdul, father of a three year old boy, said, “My son Khalid had been in home confinement for the past few months. Previously we used to take him out for at least shopping; but as the lockdown hit, children were restricted to home. Yesterday (Saturday) I took him to Shatti beach and I could see the excitement in Khalid. He was so thrilled to see the sun and the sand. We also had a dip in the sea.”

The Riyam Park also came to life with lights and rides. There were long queues of children for different rides, which had all stopped during the lockdown. The park was alive with people and food outlets did brisk business.

Sami Hosni, who came to the park after a gap of almost one year, said, “This is one of the favourite parks for me and my three daughters. They love the rides here, mainly the train.”

“The park looks so beautiful with sounds of people all around,” he added.

“I am also happy to note that people are now more responsible and wearing masks and taking care to look after nature. They are not littering around,” Hosni said.

Children need to venture out for both their physical and mental growth. This lifting of restrictions is welcomed by parents and guardians as they believe that this freedom from confinements would benefit their children’s overall growth.

Lakshmi Sarkar, senior occupational therapist, welcomed  the move and underlined the importance of physical activity “for the improvement of a child’s physical and mental health”.

“Being isolated can affect them for not getting to interact with peers and thus leading to poor social skills, social phobia among teenagers, childhood lethargy, obesity, depression, frustration and emotional imbalance. Apart from getting fresh air, improving lung capacity and getting Vitamin D, it increases vitality and activeness, which is no match to any gadgets or online activities,” she added.