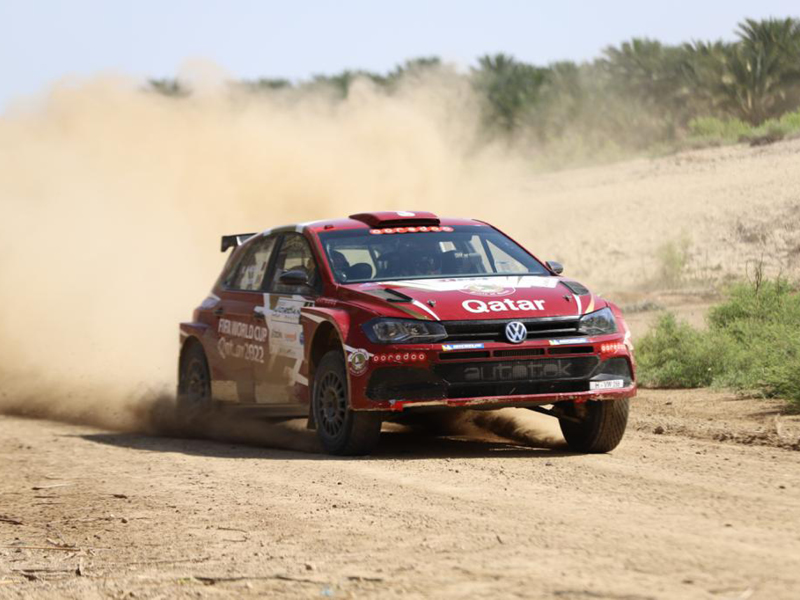 There was disappointment for Oman’s rally drivers at the Jordan Rally, the second round of the 2021 FIA Middle East Rally Championship (MERC), which concluded on Saturday.

Wahaibi, who was looking forward to a competitive return to the MERC after a gap of nine years, escaped a shock crash on the eve of the start of the two-day race on Thursday to rule himself out after his Skoda Fabia 1.6 car suffered major damages.

Rawahi, the defending MERC runner-up, was forced out of the rally on the first day on Friday due to overheating engine issues.

The Volkswagen Polo GTi driver and his Andorra-based co-driver Matthieu Baumel won each of the ten special stages in the Dead Sea and Mount Nebo areas to extend their leads in the FIA MERC.

Attiyah is bidding for a record-breaking 17th regional title this year, as he secured a 78th career MERC event win and Baumel sealed personal win number 27.

Kuwait’s Meshari al Thefiri began the day with a 40.8-second cushion at the head of the MERC2 category and the second-placed Mitsubishi Lancer Evo X driver confirmed another ‘showroom’ class success after nearest rival Alex Feghali opted to drive cautiously over the final day to conserve a first-ever podium place on an MERC rally.

On Friday, Rawahi was sidelined with engine issues in his Ford Fiesta after overheating at the end of the first loop.

“We had a puncture on the rear on the first stage, and then another one on the longer second one,” said Rawahi. “It was really tough. I guess the rubber from the tyre cut a bit of the pipe on the radiator and we got a bit of a leak. The car over heated but we only knew after the third stage. It stopped. We managed to get back to service but the compression was low on the engine and we could not continue.”

Young Rawahi had begun well and became embroiled in a battle for third and fourth places with half a second separating him and Feghali. However, the scorching heat took a toll on Rawahi and his co-driver as the car caused overheating to force them out.

Earlier on Thursday, Wahaibi was left heart-broken after his dreams to make a return to MERC was dashed by an accident while testing tyres on Thursday morning.

With his car damaged, he could not make it to the ceremonial start.

Wahaibi said, “I lost a bit of concentration while testing tyres. I just ran a bit wide out of a corner and went into a small ditch. The car went end-over-end about five times. Ilka (Minor) and I are both okay. The car proved its strength. I was so happy to be here and back in rallying.

“We will be in Rally Lebanon, for sure. Thanks to the organisers for all their support. The welcome has been great, fans, competitors and my friend Nasser (al Attiyah) was so supportive.”

Speaking after winning the title on Saturday, Attiyah said, “This is a good feeling. A good day. It was a nice rally for us. A win again, 14 times in Jordan, and we have a good lead in the Middle East Championship. The next step will be Lebanon Rally and we try to defend our title.”

The 2021 FIA Middle East Rally Championship resumes with the Rally of Lebanon on September 3-5.