IT engineer follows his passion into carpentry 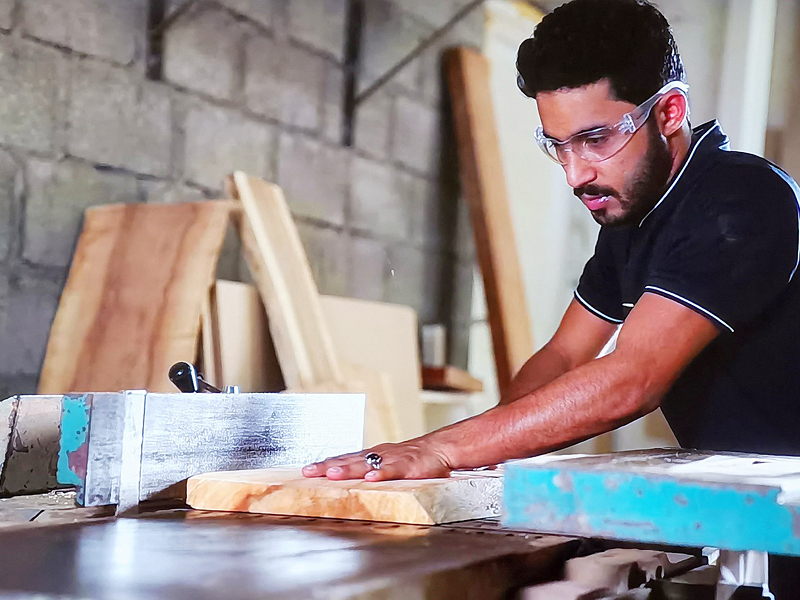 His family and fiends balked at the idea of Mazin Ali Hilal Mubarak al Bassami – a 26 year old engineer from Rustaq – pursuing passion in crafting wooden furniture in contrast to his academic qualification.

Not the one to give up easily, Bassami started small with a workshop in his home in 2017 and persisted. The young entrepreneur, who graduated from the Middle East University in IT in the same year, used his skills to make furniture from wood found locally such as sidr, al mees and al shareer.

Soon enough he found an appreciative clientele which led him to slowly save for a bigger workshop, which he currently operates in Rustaq Industrial Area.

Bassami believes that he is probably the first university graduate who has taken up carpentry as a profession.

Speaking to Muscat Daily, the IT engineer said that he started making small wooden furniture initially.

“Slowly, I developed skills to make furniture for bedrooms and living rooms. I brought modern machines to carve and shape up different furniture with more precisions,” he said, adding that a complete range of furniture for a bedroom or a living room “takes eight to ten days for completion”.

Carpentry is not easy, Bassami said. “You need money to buy woods. It then requires a lot of hard work, skill and patience to create a desired piece of furniture. Initially, a part of my house was converted into a manufacturing unit. But now I have big workshop called Mazin Wood Works in the industrial area in Rustaq.”

Bassami recalled that his family was not convinced of his work initially.

“After my success they started supporting me.”

Bassami said he makes all kinds of products including chairs, tables, gift items from wood, and promote them on social media platforms.”

About his plans, he said, “Success doesn’t come overnight. I wish to build a furniture factory and sell my products all over the world. I urges job seekers to believe in their capabilities and start their own business.”