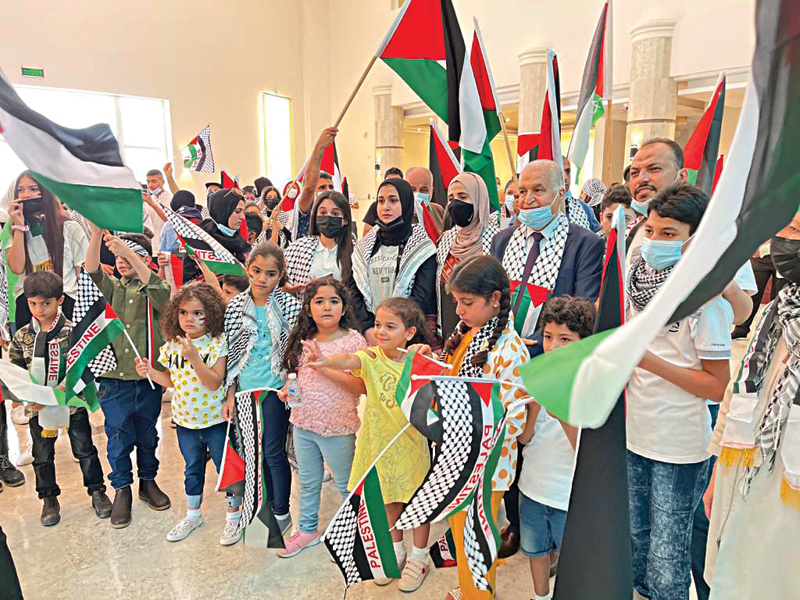 The Embassy of Palestine in Muscat organised a solidarity stand at its premises on Thursday. The event was in response to the Israeli strikes on Gaza and occupation forces storming the Al Aqsa Mosque. It also demonstrated the rejection of Israel’s policy of forced expulsion of Palestinian people from their homes in Jerusalem city.

The show of solidarity was attended by members of the diplomatic mission and a number of Palestinian residents of Oman, amid precautionary measures to prevent the spread of COVID-19.

Participants called upon the international community for action to implement a ceasefire and stop the displacement of Palestinians from their homes.

A gathering of supporters of the Palestinian cause gathered in the Sarooj area in Qurm, too, on Thursday in a show of solidarity. Among them was Christine, an Irish resident, and her two daughters aged 17 and 21.

“The world needs to notice oppression, take a stand and say no to brutality. We must say no when a group of helpless and poor people is being overwhelmed by a stronger gro-up of people. They have the right to live in safety and in peace; they should have access to the same facilities as their neighbours.”

Christine noted Palestinians’ sufferings have been going on for many years. “It’s time for it to stop,” she said, as tears welled up in her eyes. “I am quite sensitive about these things.”

Mazin, a Palestinian resident, was there in support with his two children – a five year old son and ten year old daughter. “We want to show the world that Palestinians are living under threat from occupying forces all over Palestine. I believe it is not just Palestinians or Muslims; it is a problem for all humanity and the world should support Palestine to be free of oppression.”

Faidh al Oojaili, who came to Sarooj with five other family members, said, “We are here to show our support for the Palestinian people,” he said, holding up placards reading ‘Save Palestine’ and ‘Justice for Palestine’.