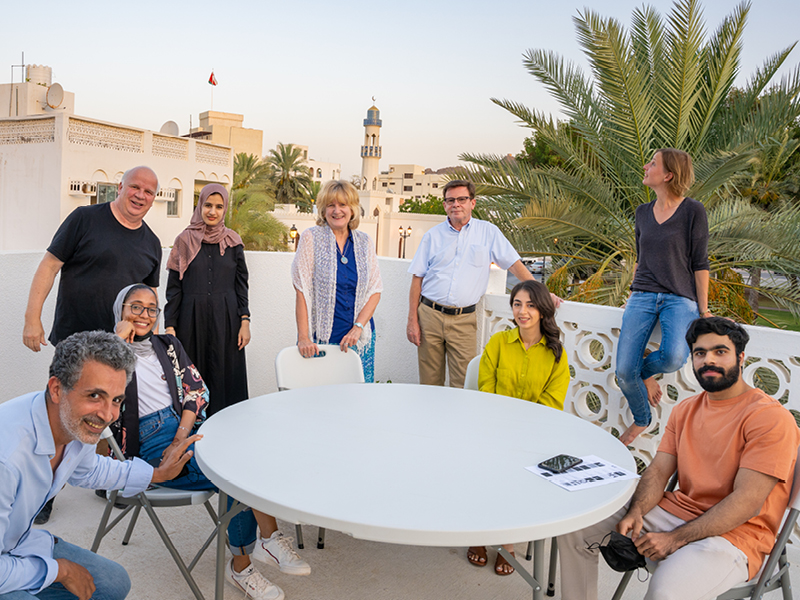 When you enter Fikra Gallery, located in an old dwelling along the winding lanes of Muttrah (on the way to the Al Alam Palace), you would discover an eerie silence that somehow doesn’t get disturbed by the constant roaring of vehicles passing by on the road alongside. But as you take in the artisitic exhibits that are currently on display, you would find yourself engulfed by a mysteriousdin that cannot quite be subdued by cursory glances.

‘Omission’, an exhibition of minimalistic artworks by Matti Sirvio (a Finnish wizard with the paint brush and propreitor of Matti Sirvio’s Art Gallery), along with those of six Omani and five expatriate artists, opened yesterday at the gallery. If you are an art enthusiast or appreciate art as a source of bliss, this is a unique opportunity to come face to face with a genre that enables artists achieve real freedom from the trappings of the consumer culture around the world.

To truly understand and appreciate minimalistic art one needs to essentially come to terms with the essence of minimalism – of ridding oneself of life’s excesses and focusing on what’s most important.Only then can it serve as an effective tool that can lead one towards freedom from fears, worries, guilt, et al. And, the exhibits in ‘Omission’ seem to rally around this concept in an affirmative way that transports the viewer onto a path of introspection.

Having sifted through numerous exhibits proposed for this exhibition, Matti says he had a real tough time arriving at the final set. After trying out various combinations and trying to juxtapose the most apt exibits next to each other, Matti admits that he had to ‘listen’ to conflicting demands and dictates from the various exhibits while curating this exhibtion – a task that was taxing as well as fulfilling.

“This concept of minimalism is an interesting concept. We called this exhibition ‘Omission’ with the idea that your are kind of reducing information, and you are deleting stuff, so that the main message is left. I like that concept of minimalism in today’s world where materialism is very much prevalent,” he said, adding that in putting up this exhibition, he liked how the different exhibits interacted with each other.

“Some of the exhibits were very strong and you don’t know how strong they are until you put them up with others and they start ‘fighting’ just like people. They cannot stand someone else next to them and cannot stay in the same room with them,” Matti explained, adding that he had around 30 pieces of art which were considered while curating the exhibition, before arriving at the final set that stayed in harmony with each other.

When asked how artists and curators in Oman can create a greater appreciation of abstract art in the sultanate by taking up initiatives to educate people and create an interest in understanding and appreciating art, Matti termed it as a ‘tall order’.

“In order to appreciate art you need to kind of ‘fall in love with a piece of art’. It can happen when a viewer visits the art gallery and one small aspect he sees touches his heart. Then we are happy and we feel we have contributed something…but to educate people at large may not be possible,” he asserted.

Some of the participating artists said they were thrilled to be part of the exhibition and that they discovered that their own exhibit seemed to exist in perfect harmony with the rest in a way they hadn’t imagined. Some also admitted that they perceived their own work in new light after seeing it as part of ‘Omission’.

Clive Gracey, a senior Irish artist who put up an exhibit titled ‘But if the while I think on thee’ (a line from Shakespeare’s Sonnet 30: When to the sessions of sweet silent thought) said it brought back memories of an old friend who wasn’t as ‘privileged’ as himself and that helps him find solace in times when he feels down or upset.

On the other hand, Majid al Amri, a student of art, who has put up two exhibits titled ‘Lonely’ and ‘The Human’ said abstract art gives him the freedom to express his innermost feelings without any inhibitions and that’s exactly what he seeks to convey through his exhibits.

“Lonely conveys the plight of an individual who finds himself desolate despite being surrounded by numerous individuals in the world while The Human is a pointer to how human beings are more involved in destroying the earth than conserving it,” Majid explained.

Anneta, who has contributed a unique piece of art fabricated from paper called ‘Written in sand’, said the inspiration behind it was her morning walks on Qurm beach when she likes to enjoy silence and solitude and be able to ponder and pray. “It’s an exact copy of a section of the sand on Qurm, which was geometrically very interesting. I created the same imprint on paper, with serveral layers to form the final piece,” she said, adding that though her piece was unique compared to the rest, it fit well with the collection on display.

Marcia who has put up seven exhibits in this exhibition said some of them were created a while ago but they seemed to gel well with the current theme of minimalistic art. “It takes a lot of effort and pressure to curate an exhibition like this and Matti has a special talent for curating exhibitions with different themes,” she said pointing out, “For most artists their work is done when an artwork is ready…but for Matti, his work begins right there.”

Other participating artists, like Kawthar, pointed out that her exhibit of a set of abandoned bricks indicate that one can find beauty in the most mundane things around us, if one decides to view them artistically. Also, Haneen, who put up a set of three interrelated frames – titled Crescent – said her depiction of abstract curves in black and white were also indicative of beauty in the simplest shapes. Life does not have to be complicated, to be beautiful, she asserted.

The common refrain among the participating artists was the fact that an exhibition with varied exhibits comes alive only when the curator knows his way around the exhibits. While each exhibit has its own character and potential, it is actually the curator’s call to bind them with a common chord and churn out harmony among them, they said.