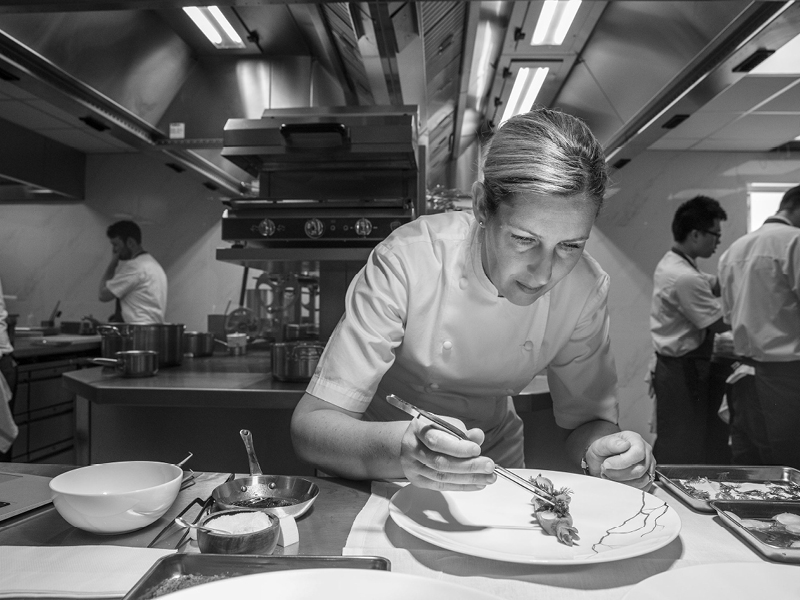 During lockdown, British chef Clare Smyth won the ultimate accolade of three Michelin stars for her London restaurant and she is optimistic for the sector despite the current challenges.

The 42-year-old from Northern Ireland became the first British woman to be awarded three Michelin stars in January – one of only four British chefs to have achieved the honour.

She says getting the third star for her ‘Core by Clare Smyth’ restaurant was a dream come true, adding, “it was brilliant that it happened in such a difficult year”.

Britain’s hospitality sector has been hit hard by the pandemic with restaurants barred from indoor service over the winter months. During lockdown, the staff at Core, which had opened in London’s fashionable Notting Hill neighbourhood in 2017, spent time preparing hundreds of meals for charity.

The restaurant also began offering takeaway and delivery menus which worked really well, Smyth says. Lockdown also meant the chef, who exudes a calm authority, had to tell her team about the Michelin star via video call.

As restaurants prepare to fully re-open this week, the absence of tourists due to travelrestrictions means that, for some, it might be a while before business gets back to normal. But, at Core, the dining room is fully booked until August.

“We’re very lucky, we’ve got a great regular base,” Smyth said, with celebrities such as footballer David Beckham and his family among the clientele.

To comply with social distancing rules, the restaurant has had to cut the number of covers to 44 from 54 and its 42 staff take weekly virus tests.

With its shelves of vintage recipe books, decanters of liqueurs and comfortable chairs, Core’s interior feels warm and intimate. The Michelin guide praises its “modern dishes that deliver superb flavours and textures but in a restrained, understated style.”

Chef Helene Darroze, told AFP, Smyth was ‘a monster of rigor and precision’ and had ‘a strength of character in her work that is quite incredible and which I really admire’.

The menu is about perfecting simple unpretentious ingredients such as potatoes and carrots. A signature dish is ‘potato and roe’, which is a potato topped with herring and trout roe, served with a beurre blanc sauce.

Smyth says, “the dish is very nostalgic for me” as it was inspired by the flavours of her childhood. “I grew up in Ireland, eating potatoes every day, and I grew up right by the coast,” she said.

Core aims to source not just its produce but even its china and silverware from Britain. At the same time, its team is highly international, something that Smyth hopes to preserve despite the tougher rules on immigration from the European Union after Brexit.

“We need these constant young people, this constant staff coming in,” she said, expressing her fear that Brexit is going to have a huge impact on recruiting staff.

Smyth was 16 when she left her family’s farm in County Antrim, west of Belfast, and went to train in England.

She worked at Alain Ducasse’s Louis XV restaurant in Monaco and then spent 13 years at Restaurant Gordon Ramsay, under the celebrity British chef in the chic London district of Chelsea. Both restaurants have three Michelin stars.

Prince Harry and Meghan Markle chose Smyth to cater their wedding reception in May 2018 which, she says, was “like a fairy tale” and “something we’ll certainly all remember for a long time”.

She has also appeared on cooking shows such as ‘MasterChef’ in Britain and Australia, Netflix’s ‘The Final Table’ and the US reality show ‘Top Chef’.

In July, she is set to open her first restaurant in Australia, Oncore, at the Crown Sydney hotel.

Along with Core, this year the only other British restaurant to receive a third Michelin star was Helene Darroze at The Connaught hotel in London, named after its French chef.

To have two female chefs top the table is quite rare’, Smyth admitted, but she anticipates more women chefs following in their footsteps.

“I’ve got quite a few in my kitchen that I hope in the next five to 10 years will be coming through and winning their own Michelin stars,” she said.