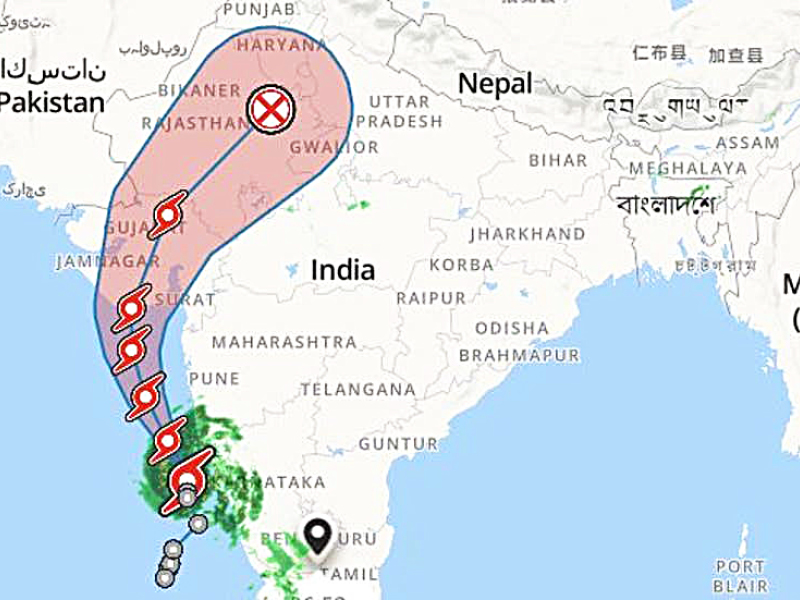 The tropical storm Tauktae in the Arabian Sea off the southwest coast of India turned into a very severe tropical storm equivalent to a category 2 hurricane on Sunday. It is likely to further intensify before making landfall in the western Indian state of Gujarat on Tuesday.

According to the National Multi-Hazard Early Warning Centre, the storm is not likely to impact Oman directly as it will make landfall on the Indian coast on May 18.

‘The sea will be moderate to rough from May 17-19 along the coast with expected wave height ranging between 2-4m. Inundation with seawater is expected over low-lying coastal areas in association with high tides,’ the centre stated.

According to The Weather Channel, Tauktae is forecast to keep a north-northwestward track parallel to the west coast of India. Aided with high sea surface temperatures of 30°C and more, the storm will intensity further for the next couple of days.

‘Landfall is forecast over the Gujarat coast during the early hours of Tuesday with a wind speed of around 150km/h.’

Western coastal regions, including Kerala, Karnataka, Maharashtra, Goa and Gujarat, will continue to witness spiral rain bands surrounding the storm and produce heavy rains of more than 100mm/day. Even after the storm moves away, southern India will continuously receive more than 20mm of daily rainfall over the next five days due to southwesterly onshore winds.

The Indian Meteorological Department forecasts that the eye of the storm will cross the coast between Porbandar and Mahuva in the Bhavnagar district of Gujarat.